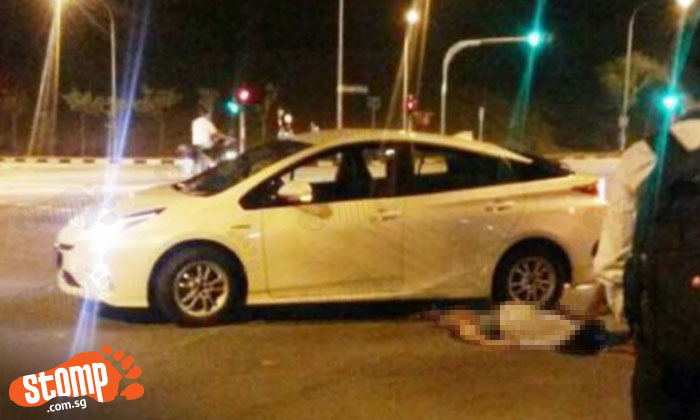 A 57-year-old e-bike rider died after getting hit by a car at the junction of Buangkok Green and Hougang Street 93 on Feb 13 at around 8pm.

Stomper Mervyn was driving his taxi along Buangkok Green when he came across the scene of the accident.

He saw the e-biker lying motionless under the white car.

"I don't know who was in the wrong in this case, but it's very sad.

"Either way, the driver should have looked out for the e-biker."

In a report on Tuesday, Lianhe Wanbao identified the 57-year-old rider to be Mr Ng Cheo Kok who died on Tuesday morning after being conveyed unconscious to Tan Tock Seng Hospital.

When reporters arrived at the scene, they saw blood on the road. The e-bike was also badly bent out of shape.

The accident reportedly happened when the driver was turning left into Buangkok Green.

When the driver stepped out of his vehicle, he saw Mr Ng 'vomitting blood'.

This is the latest in a spate of fatal e-bike accidents.

In November last year, a 62-year-old e-bike rider died in an accident with a tipper truck.

Two other e-bike riders, aged 18 and 25, died in an accident involving three e-bikes and a trailer in October.