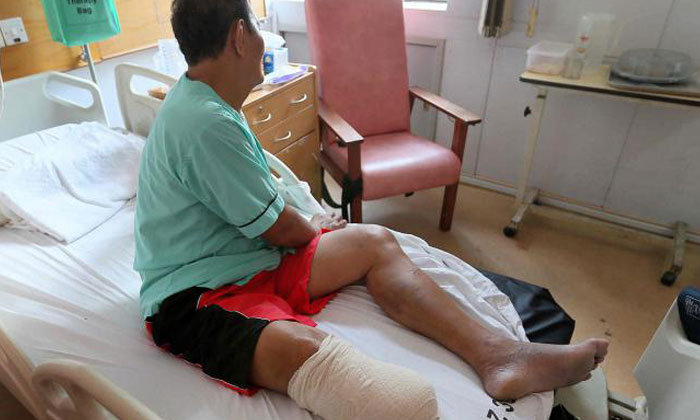 A week before Hari Raya Aidilfitri, a 66-year-old stall helper lost the lower half of his right leg after an accident while he was riding a motorised bicycle.

Mr Hassan Jalal was hit by a car while trying to change lanes as he approached Bendemeer Primary School to pick up his step-grandsons, aged eight and 12, at around 3pm on June 29.

Mr Hassan, who considers himself an experienced rider as he had been using the motorised bicycle daily since 2013, said he was moving from the extreme left to the extreme right of the four-lane Bendemeer Road towards the school gate when the collision occurred.

Mr Hassan, who has seven step-grandsons, aged eight to 23, told The New Paper in Malay on Tuesday: "I was flung about five metres and landed in a heap on the road.

"As I sat up, I was shocked to see that my right leg below the knee was totally mangled. My right foot looked like minced meat."

The injury was so severe, doctors had to amputate his leg just below the knee.

Still, Mr Hassan, who has two adult step-children, is thankful to be alive.

Tears glistening in his eyes, he said: "I'm lucky I always wear a helmet when I ride my bike. Otherwise, I'd definitely be dead from head injuries."

His other injuries included cuts on his limbs and a fractured right rib.

He is now recuperating at the Ang Mo Kio-Thye Hua Kwan Hospital.

The Singapore Civil Defence Force said Mr Hassan was taken to Tan Tock Seng Hospital after they were alerted to the accident at 3.12pm.

Police statistics show that the number of deaths and injuries from accidents involving conventional and motorised bicycles has gone up.

Mr Hassan, who used to earn about $700 a month, lives in a one-room rental flat in Geylang Bahru with his wife, her daughter, four step-grandsons and his stepson-in-law.

He said: "I'm not rich so the bike was a good investment. Taxis are very expensive, and I don't find buses and trains convenient. This bike was the best option as it was affordable and took me places."

It took him five minutes to ride from his home to the school to pick up his step-grandsons daily.

He said the driver of the car called for an ambulance.

While waiting for it to arrive, Mr Hassan called his stepdaughter, Madam Noryani Abdul Rahman, a 40-year-old mother of six.

The housewife said she was walking home after shopping for groceries when she got the call.

"When I reached him about 10 minutes later, I almost fainted when I saw his right leg," she said.

Mr Hassan is worried about his medical bills because he does not have insurance.

His 68-year-old wife earns about $800 a month as a cleaner, and Madam Noryani's husband, a delivery driver, brings home about $1,000 a month.

Mr Hassan said: "I dread to think about the bills as I have a big family with many mouths to feed. But a social worker visited me on Monday and told me not to worry."

Two boys, aged 16 and 18, were flung onto the bonnet of a car at the junction of Ang Mo Kio Avenue 6 and Avenue 8 after their e-bike crashed into a car.

The teenagers were speeding and had beaten a red light when the accident happened.

They were taken to Khoo Teck Puat Hospital for treatment and later discharged.

Odd-job labourer Ang Thiam Beng, 55, died after his e-bike collided with a lorry.

He was making a right turn from Pioneer Road North to Jurong West Avenue 4 when the accident happened.

Madam Lucy Tay had a hairline fracture in her right shin, while her sister had cuts and bruises.

The boy had been speeding. The police classified it as a case of a rash act causing grievous hurt.

Coffee shop owner Tan Heng Huat, 40, was riding his power-assisted bike on a pavement in Paya Lebar Way when he collided with Madam Heng Lian Cheng, 68. She had a head injury and facial fractures.

Tan was jailed for five weeks on July 11 this year.