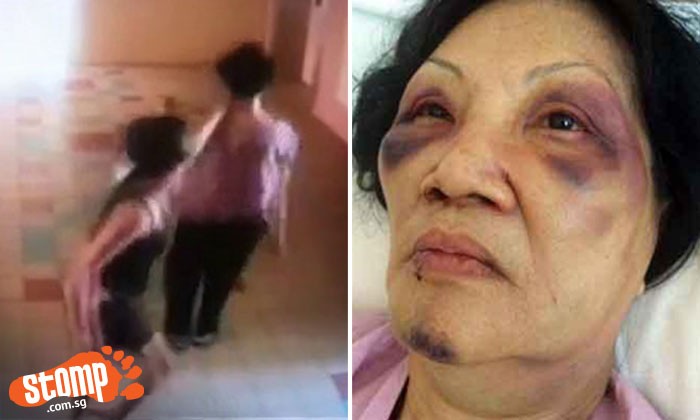 Three years after she was brutally beaten up by a neighbour, Madam Toh Siew Hong, 67, still lives in fear. She is wary when leaving her home and hides whenever the doorbell rings.

She has lost some of her sense of smell and the pain in her back serves as a reminder of the assault.

Haunted by memories of the attack, she cannot fall asleep sometimes, and used to wake up in the middle of the night screaming.

On the morning of Sept 28, 2013, Madam Toh was on her way home after grocery shopping when her neighbour, Casey Sabrina Ng, 43, also known as Asha Verma, stopped her at the lift lobby outside her Chai Chee Road flat.

Madam Toh told The Straits Times that she had not noticed Ng approaching. Ng shouted at her before shoving her.

The elderly woman retaliated, only to be attacked for an agonising 18 minutes. She was dragged across the floor by her hair, stomped on her head repeatedly and had an aluminium incense burner flung at her.

"There were others watching from (Ng's) house when she was beating me up. One of them had a knife in his hand.

"I grabbed on to Ng's leg and told her: 'If I die, all of you are doomed too,'" recalled Madam Toh, tears welling up in her eyes.

She moved out of Chai Chee for some time but moved back after Ng left. But the elderly woman said she still feels worried.

It was not the first time Ng had caused trouble for Madam Toh and her family.

Over about five months before the incident, they went to the police around five times because of Ng, said Madam Toh.

Madam Toh's elder daughter, Ms Maddy Yap, 42, who works in human resource management, said Ng had moved into a unit on the same floor as her mother's in early 2013.

Madam Toh's troubles began when someone called the police in May that year to complain about loud noises from Ng's unit.

"Every now and then, she would come and kick my mother's door, asking her why she called the police," said Ms Yap.

"We kept explaining to her that it was not us."

She said this did not stop Ng from banging on Madam Toh's door, smashing her flowerpots and hurling vulgarities in Hokkien.

Ng would sometimes be drunk and yell at passers-by, and chase Madam Toh when she was going home, Ms Yap said.

Each time her family called the police, Ng was said to have denied her deeds. "(Ng) told us that the police would never nab her," said Madam Toh.

Ms Yap said: "Police would come and knock on (Ng's) door, but each time they left, things got worse. It was endless... We felt helpless."

Eventually, they installed a security camera outside their unit.

Yesterday, Ng was sentenced to 5½ years of corrective training.

After her discharge from hospital, Madam Toh moved from her Chai Chee home of 16 years to live with other family members for more than a year.

"She brought us up single-handedly," said Ms Yap, the oldest of three siblings.

"Watching your mother get beaten (on video) and being unable to help is torturous. You can never recover from that memory."

Son-in-law, his family reported her to police

The 43-year-old woman who assaulted her Chai Chee neighbour also has a history of aggression towards her son-in-law and his family.

"(Ng) has been like that from the day I knew my wife... She's a violent person," Casey Sabrina Ng's son-in-law, Mr Lester Pereira, told The Straits Times.

Mr Pereira, 27, and his sister, Lynneth, 23, made police reports against Ng last year after incidents at the Bukit Batok flat where they live with their uncle.

Besides "causing a nuisance", Ng had tried to set fire to the entrance of their unit. She then threatened Ms Pereira with a chopper.

"She was not happy that my wife and I were not together at that point in time," said Mr Pereira, who is going through a divorce with Ng's daughter. Married for six years, the couple have a four-year-old daughter and a son who is turning two. His wife has another daughter, aged six, born out of wedlock.

Mr Pereira, who does contract jobs, first met Ng before marrying her daughter.

Ng had turned up at his uncle's home, where her daughter was then living. Fresh out of jail, Ng had no place to stay and no money for food.

Mr Pereira's aunt took her in and not long after, Ng started drinking and finding trouble with the family for no apparent reason, he alleged.

"I told my wife not to have her around. We couldn't live happily at all," he added. He was also told that Ng would enlist the help of others to beat him up, he said, adding that his mother-in-law did not like him.

Around 2013, his family lost contact with Ng for more than a year when she lived in Chai Chee with an older man she said was her uncle. But one day in 2014, Mr Pereira found her on his doorstep, drunk. When he asked why she was there, she broke down in tears - the older man had been injured. "She got frightened and ran away," he said.

Later that day, he said he found her taking drugs to "cool off".

"She drank and she took drugs in my house," he said, adding that she also hit his children to provoke him.

While Ng did not like many people, he said, she was "okay" with her daughter. Each time Ng got into trouble with the law, her daughter would bail her out. At first, Mr Pereira helped as Ng had promised to change. But once she stepped out of the police station, she returned to her old ways, he said.

"I told my wife, please don't bail her out. If she really has depression, she needs treatment." He said Ng has a certificate saying she has depression. But his wife persisted.

Related Stories
Elderly woman gets brutally beaten up by neighbour at lift landing
Woman pleads guilty to 'vicious' assault on elderly neighbour -- which was caught on video
More About:
assault
fight