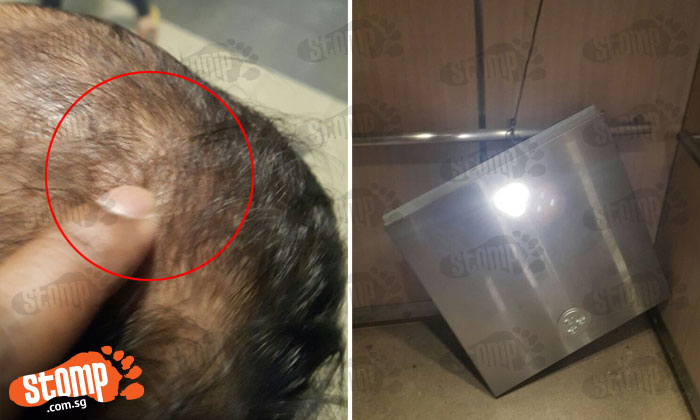 How would you feel if part of the lift's ceiling fell on you while you were in it? And imagine this happening to you when you're a little three-year-old kid.

On Thursday (Nov 10) at around 10pm, the interior of a lift ceiling at Block 480, Pasir Ris Drive 4, fell on Stomper Yuzkoz's three-year-old nephew while he was in the lift with the Stomper's father and brother.

"My family had taken the lift at first but this didn't happen. But during the next ride when my nephew boarded it, the incident took place.

"It only fell on him as it dropped on one side first.

"He's only three so it was a very traumatising experience for him.

"He has a a slight bump on his head, but we brought him to the clinic to get it treated. Thankfully, it's nothing major.

"However, he's now scared to enter the lift."

According to the Stomper, there were renovations taking place in the block resulting in the increased usage of the lift. However, the cause of the ceiling's collapse is still unknown.

"This is definitely dangerous and unacceptable because the lift is supposed to be 'safe' but even then the ceiling can collapse," said Yuzkoz.

The Stomper has contacted the relevant authorities and we hope that the matter will be resolved soon.