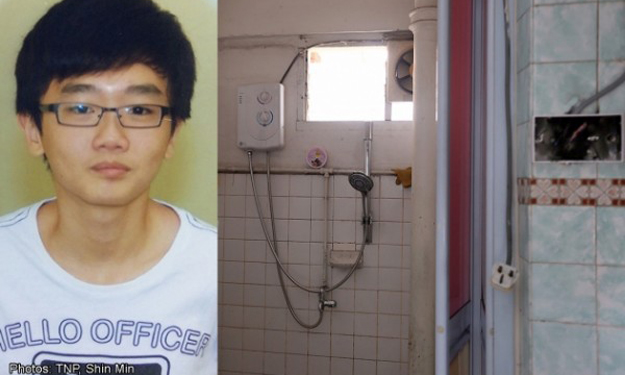 He was taking his usual shower in the evening when, suddenly, he started screaming.

Shocked, the family rushed to the door, only to find it locked. Beside the door, an electrical socket connected to the water heater was smoking.

When they finally battered the door open, 18-year-old Gregory Ng was on the floor.

"We turned off the electrical switch and went to his side," said his grandfather, Anthony Ng, 62, a taxi driver.

His face was very pale by then, the older man told The New Paper at their Hougang Avenue 3 flat on Saturday.

The incident happened around 10pm on Friday. Mr Ng, a recent graduate of the Institute of Technical Education who was waiting for his national service call-up, was unconscious when the ambulance took him to Changi General Hospital. He died shortly after.

A Singapore Civil Defence Force spokesman said he died of a cardiac arrest. He was cremated on Saturday afternoon.

During The New Paper's visit, his grandfather explained that the young man had lived with his grandparents, his aunt and his two younger brothers in the three-room flat since he was a boy, after his parents' divorce.

Recalling the tragedy, the 62-year-old said that before the shower, Mr Ng had told his grandmother he'd talk to her after his bath.

His younger brother and aunt tried to perform cardiopulmonary resuscitation, with instructions from the rescuer on the phone, but to no avail.

Gesturing to the water heater, which was connected to the socket by a wire, the grandfather said that they had bought it recently to replace the old one, which was not working.

He said he had picked a branded heater based on the shop's recommendations.

He was heard saying: "I spent more than $300 on the water heater and it killed my grandson."

Police have classified the case as an unnatural death and are investigating.