18-year-old who died after getting electrocuted during shower: Police investigating unlicensed technician 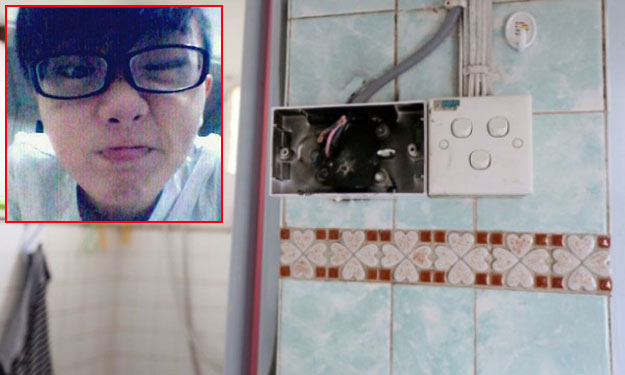 Police are investigating the technician who installed the water heater that an 18-year-old was using when he died last August.

18-year-old Gregory Ng was just taking his usual evening shower on Aug 29 at his Hougang Avenue 3 flat when he started screaming.

Family then found him unconscious on the floor, and the electrical socket connected to the water heater was smoking.

He died shortly after being sent to Changi General Hospital.

According to Lianhe Wanbao, coroner Mr. Ma says he believes that the teen was electrocuted.

Gregory's left hand had scorches from an electric shock, which ruled out foul play.

He mentioned that the police are currently investigating details about the technician that installed the water heater.

The victim's grandfather had spent $300 on the new water heater at a shop near his house. The shop owner then recommended a Mr. Bai Jin Yi to help install it.

Mr. Bai is a taxi driver, and started to be a part-time technician in 2000. He has helped other customers of the store to install their electrical appliances.

However, he does not possess a licence from the Energy Market Authority (EMA).

The public is advised to check a list of authorised technicians from the EMA website for their own safety.