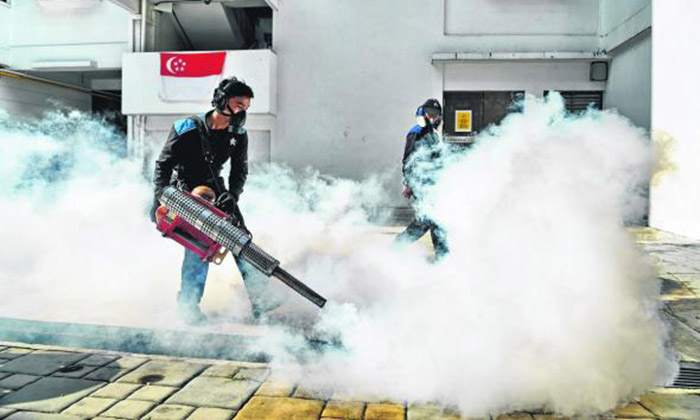 11 new cases of Zika infections in Singapore were reported as of noon on Sunday (Sept 11).

Of the new cases, one is linked to the Elite Terrace cluster while the others are not linked to any of the seven existing clusters, the Health Ministry (MOH) and the National Environment Agency (NEA) said in a joint statement.

The latest cases bring the total number of locally transmitted Zika infections in the republic to 329.

The authorities confirmed that eight pregnant women were confirmed to have contracted the virus so far, and that their doctors are following up with them to provide counselling and support.

The first case of locally transmitted Zika virus infection in Singapore was reported two weeks ago on Aug 27.

Seven clusters have been identified to date, and vector control operations were continuing in these cluster areas, MOH and NEA said.

As of Sep 10, 202 breeding habitats, comprising 121 from homes and 81 from common areas, have been detected and destroyed.

MOH and NEA also said that they will be providing daily updates on NEA's website from Monday (Sept 12), in place of daily media statements.

Members of the public may refer to the website for updated information on the number of reported Zika cases and ongoing clusters.

On Sunday, it was also reported that 21 cases of Zika were confirmed in the Thai capital of Bangkok.

The victims included a pregnant woman whose husband had recently returned from Singapore.

Related Stories
Schools take precautions in light of Zika
Hawkers suffer after Zika turns Sims Drive and Aljunied Crescent food centres into 'ghost towns'
My experience with Zika: Aljunied resident who got virus shares what it's like
More About:
Zika
mosquito
disease