2 dead, 1 injured after collision between container truck and e-bikers at West Coast Highway 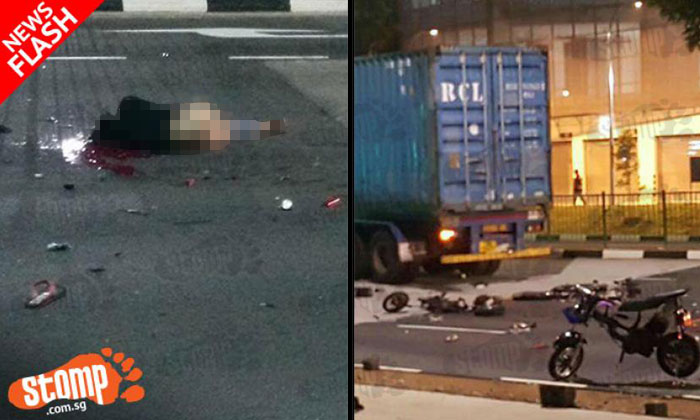 A second victim has died from his injuries.

Read the Police statement below:

"On 27 October at 11.56pm, the police were alerted to an accident involving a trailer and three power assisted bicycles along West Coast Highway.

"A 25-year-old man was pronounced dead at scene. Two men aged 18 and 17 were conveyed to NUH where the former subsequently succumbed to his injuries.

"The 34-year-old trailer driver was arrested for causing death by negligent act. Police investigations are ongoing."

A collision between three electric bikers (e-bikers) and a container truck at 11.59pm yesterday (Oct 27) at the junction of Pandan Crescent on the West Coast Highway left two dead and one injured.

Stompers Adrian, Marcus, Riduwan and Valerie alerted Stomp to the incident, along with a Facebook post by Naing Htay showing photos and videos of the aftermath of the crash.

The photos and videos show one biker lying in a pool of blood in the middle of the road, with bike parts scattered all around him.

"We dispatched two ambulances. There were a total of three casualties.

"One was pronounced dead at the scene. The other two were sent to National University Hospital (NUH)."

This is an unfortunate incident. We would like to take this opportunity to caution all e-bike and e-scooter riders to be more careful when they are on the road. While many riders obey traffic rules, there are some who have been caught on video behaving dangerously. Stay safe, Stompers.