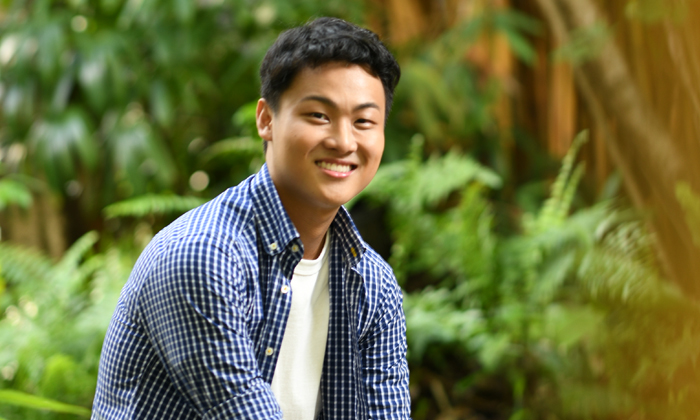 At the age of five, Ryan Ong learnt to fold a paper plane. He marvelled at how the slightest changes to the structure of the paper plane could alter its flight trajectory and characteristics.

Encouraged by his father and uncle who were engineers, Ryan delved into the science of flight and was captivated by the magic of aviation. He occupied his free time piloting aircraft and managing the airspace of busy airports through online games.

With a strong interest in electronic systems and its application to aircraft, the Kranji Secondary School alumnus secured a place in Singapore Polytechnic (SP)’s Diploma in Aerospace Engineering (DASE) course through the Early Admissions Exercise. Having visited SP’s open house, Ryan was confident of the rigorous curriculum offered by the DASE course. He was also excited by the potential experience of learning on the A320 simulators and various aircraft in SP’s Aero Hub.

Since then, Ryan has never looked back.

As an SP student, Ryan interned at the Institute of Microelectronics, a research institute that was part of the Agency for Science, Technology and Research (A*STAR) Singapore.

As part of his internship, he had the opportunity to test, analyse and run simulations of 5G satellite communications. It was a ground-breaking experience for Ryan as he played a part in the development of the 5G landscape in Singapore.

Despite the steep learning curve, Ryan challenged himself and stretched his abilities. One of his proudest moment in A*STAR was authoring a research paper that seeks to improve the bandwidth and beam width of the 5G phased array antenna. Ryan’s supervisor was impressed with the quality of his research paper as it had far exceeded the levels of a polytechnic student.

Ryan’s passion for engineering stems from his desire to give back to the community. Tapping on the knowledge and skills he picked up in the classroom, Ryan developed innovation solutions as part of the Lee Hsien Loong Interactive Digital Media SMART Nation Competition and the Cogito Ideation Competition.

The desire to use his engineering talent for the benefit of the community saw Ryan taking part in an Overseas Social Innovation Programme (OSIP). During a two-week trip to Phnom Penh, Cambodia, Ryan led a team of 15 SP students to develop a sustainable and efficient pond system that will increase the productivity of local fish farmers. It was an eye-opening experience for Ryan as he forged strong bonds of friendship with the locals and his fellow students.

In SP, the SP Engineering Scholar also assumed the role of Head of the Electrical & Electronic Engineering Student Ambassadors during his second year. One of the events he led was the SP Engineering show where he planned outreach activities for secondary school students. Ryan’s leadership shone through as he coordinated and executed the event immaculately, in hopes that participants can ignite their passion for engineering, just as he did.

Wanting to develop himself holistically, Ryan also took time to nurture his creative side. Not only is he picking up multiple languages including German, French and Spanish, Ryan is also adept in music theory and piano playing. As the Secretary of SP’s Piano Ensemble, Ryan spearheaded a collaboration with another organisation to put up a mega performance at annual Arts Fiesta event.

Looking back at his time in SP, Ryan has certainly seen his dreams take flight. Currently, he plans to pursue a degree in Electrical & Electronic Engineering in the United Kingdom.

As the world is moving towards an era of digital revolution, Ryan aspires to design and implement technological solutions that would have a positive impact on the lives of Singaporeans.