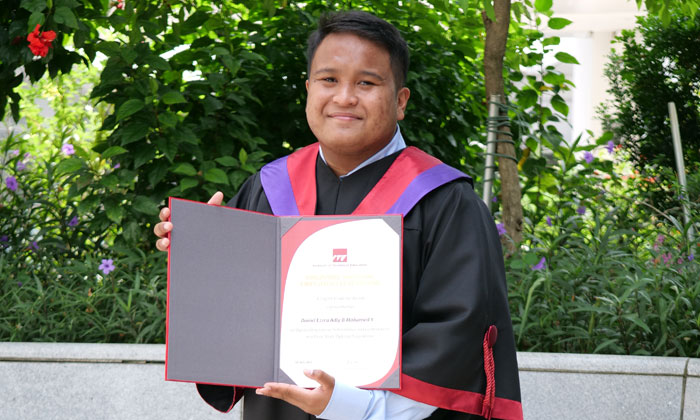 Daniel Ezzra Adly B Mohamed Y chose to take up a Work-Study Diploma (WSDip) in Security Systems Engineering at ITE because it allowed him to study and build his career at the same time. Fuelled by his passion for technology, Daniel was able to push himself beyond his comfort zone during training.

Initially shy, he was not confident in communicating with others at the start of the programme, despite possessing the know-how.

Through determination and support from his supervisors, Daniel successfully managed a project during his training and received compliments from several customers.

His resilience, positive attitude and outstanding performance during training have impressed not just his supervisors, but also the Vice President & Head of Certis Technology (Singapore).

Daniel shared: "ITE helped build up my foundation, allowing me to understand the larger context and gain knowledge of the industry.

"With the WSDip, the theories I’ve learnt translated into real-life experience and I was able to apply my knowledge into specific technologies.

"I also gained experience in soft skills earlier than my peers with on-the-job training.

"With more recognition being awarded to WSDip, I have no regrets taking up this course."

Daniel is now a Field Engineer at Certis Technology (Singapore) Pte Ltd – his employer during WSDip training. He received a pay increment upon graduation. He hopes to further his studies in the future.