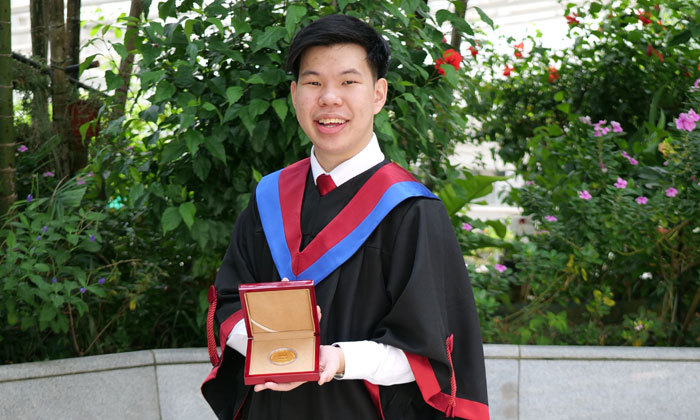 When Cody was younger, he often did not do well in school. As a result, many around him cast doubts on his future. This, however, ignited his desire to prove himself and build his own success.

Enrolling in ITE, Cody was determined to start afresh and excel. He participated in numerous competitions to challenge himself and hone his skills. These included the WorldSkills Singapore 2020 competition, where he represented ITE in the field of Electronics. Besides improving himself, Cody is also passionate about making a difference to society. As President of the Student Ambassadors Club, he actively led his peers in various community service projects. He is also working on creating an artificial intelligence (AI) chatbot, which provides emotional support for youths with mental health issues.

Cody’s motivation for self-improvement extends beyond school subjects. Driven by the desire to learn a new skill, he has been working part-time as a barista at Starbucks for three years. Establishing himself in this field, he has even attained the certification of a “Coffee Master”!

Cody shared: "I am very thankful to my lecturers at ITE, especially Mr Muhammad Basheer and Mr Teo Hock Wee.

"They believed in me, cared for me, and supported me in any way they could.

"There were several times when I felt down or stressed out while preparing for competitions.

"Mr Basheer and Mr Teo would constantly check on my well-being and give me words of encouragement.

"Their gestures of care touched me, and gave me the extra push to persevere in the face of challenges.

"I would not have been able to succeed without them."

Related Stories
Dissolving soap pods a suds-cess at ITE-NTU kickstarter competition
Trained to prepare for the worst, ITE student is a problem-solver you can turn to in difficult times
ITE students find way to help Singapore reduce carbon footprint through Artificial Intelligence
More About:
ITE