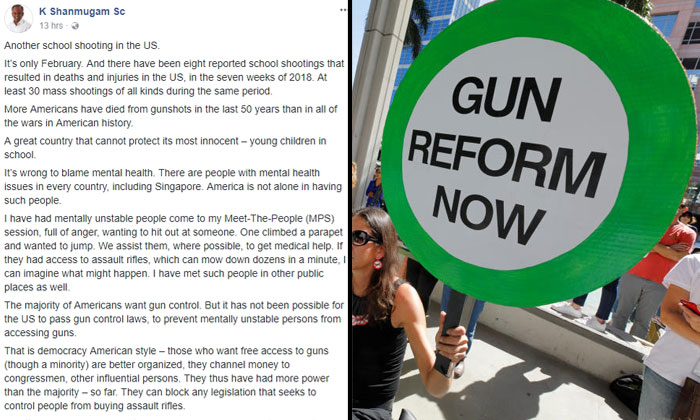 People all over the world were horrified after news broke of yet another school shooting in the United States that claimed the lives of 17 people.

The latest and the eighth US shooting in 2018 happened in Parkland, Florida, on Valentine's Day.

Some have blamed the incident on a failure to spot the signs of mental illness but the vast majority of Americans are calling out again for change and demanding a real conversation on gun control in the country.

Home Affairs and Law Minister K. Shanmugam posted his own thoughts on the incident in a Facebook post yesterday (Feb 18).

"Another school shooting in the US.

"It’s only February. And there have been eight reported school shootings that resulted in deaths and injuries in the US, in the seven weeks of 2018. At least 30 mass shootings of all kinds during the same period.

"More Americans have died from gunshots in the last 50 years than in all of the wars in American history.

"A great country that cannot protect its most innocent – young children in school.

"It’s wrong to blame mental health. There are people with mental health issues in every country, including Singapore. America is not alone in having such people.

"I have had mentally unstable people come to my Meet-The-People (MPS) session, full of anger, wanting to hit out at someone. One climbed a parapet and wanted to jump. We assist them, where possible, to get medical help. If they had access to assault rifles, which can mow down dozens in a minute, I can imagine what might happen. I have met such people in other public places as well.

"The majority of Americans want gun control. But it has not been possible for the US to pass gun control laws, to prevent mentally unstable persons from accessing guns.

"That is democracy American style – those who want free access to guns (though a minority) are better organized, they channel money to congressmen, other influential persons. They thus have had more power than the majority – so far. They can block any legislation that seeks to control people from buying assault rifles.

"It baffles me that people are freely allowed to buy submachine guns, in an urban environment."