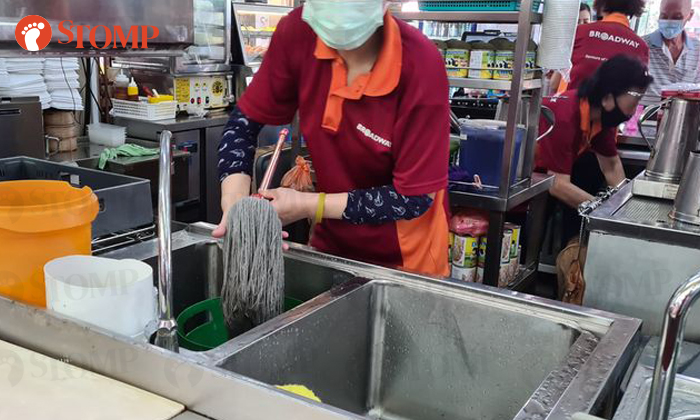 The Singapore Food Agency (SFA) is investigating an incident in which an employee was seen washing a floor mop in a common sink at a coffee shop in Hougang.

Helen shared: "She was washing a floor mop inside the same common basin used for food/hand/cup washing."

The Stomper said that she had approached the employee but was rebuffed.

Helen also expressed disgust over the incident in a Facebook post that has garnered over 600 comments and almost 3,000 shares to date.

In response to a Stomp query, the SFA said it is investigating the incident.

According to Shin Min Daily News, a spokesman for Broadway Food Centre said that the company's management had learnt of the matter and is deeply sorry for the incident.

The employee's behaviour did not comply with the company's standard operating procedure, added the spokesman.

He said: "We have taken serious action against the employee and reprimanded her. She will also undergo training again."