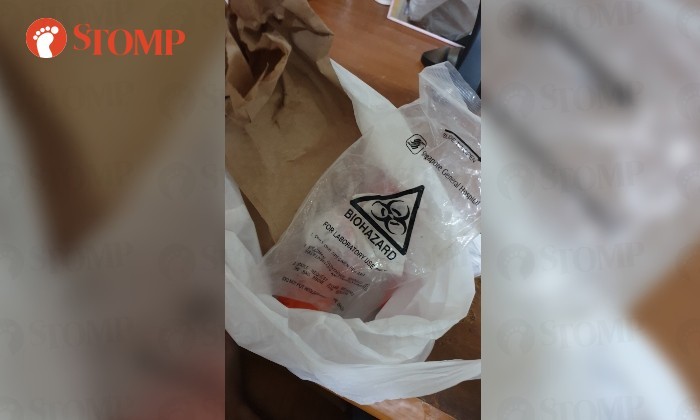 The Singapore Food Agency (SFA) is investigating an incident where a 'hospital biohazard bag' was allegedly found together with a food delivery order on August 29.

Stomper Kate informed Stomp about the incident and said she placed her order via Foodpanda at 4.49pm from the MOS Burger outlet at Paya Lebar Square.

A photo submitted by Kate shows a transparent Singapore General Hospital (SGH) biohazard bag inside a plastic bag which also contained a paper bag with her food.

The words 'for laboratory use' can be seen printed on the biohazard bag.

"I found an SGH biohazard bag inside the takeaway bag with my MOS Burger food," Kate said.

"I was shocked and also scared because I have no idea what this bag was previously used for.

"I contacted Foodpanda since it was their rider who delivered the food.

"Foodpanda has since refunded the full amount to me but they did not explain how the biohazard bag ended up together with my food.

"MOS Burger also updated me that they are liaising with Foodpanda to investigate the matter.

"According to MOS Burger, the Foodpanda delivery rider could have gone someplace else before delivering my food."

In response to a Stomp query, a spokesman for SFA said: "SFA has received feedback and is investigating the matter.

"Operators of food delivery services are subject to food safety and hygiene requirements under the Sale of Food Act and the Environmental Public Health Act, and are responsible for ensuring that the food they deliver is transported in a manner that is hygienic and does not compromise food safety.

"This includes maintaining the cleanliness of the vehicle, as well as the carrier bag, receptacle and equipment used for the transportation of food.

"For instance, under the Environment Public Health (Food Hygiene) Regulations, no person shall carry, place or deposit or allow to be carried, placed or deposited in any vehicle carrying food for sale any dirt or any other material which may contaminate the food or affect the wholesomeness or cleanliness of the food carried therein."

Stomp has contacted Foodpanda and MOS Burger for more information.