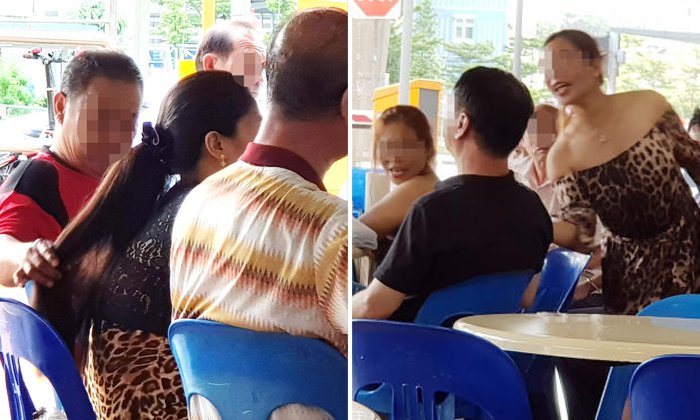 Several domestic workers have been seen behaving intimately with male patrons at a coffee shop along Boon Keng Road, accompanying them for drinks while dressed sexily.

Shin Min Daily News previously reported that a large group of maids and workers -- sometimes as many as 200 people -- would gather on a grass patch outside Kallang MRT Station every weekend to have picnics and play volleyball.

Besides creating a ruckus, they would also behave intimately in public, reported Shin Min.

Following the report, a member of the public contacted Shin Min and informed them that something of a similar nature was occurring at a coffee shop nearby.

Mr Zhang, 70, said the coffee shop was located at an HDB block along Boon Keng Road.

In the past two months, he noticed how several foreign maids would be at the coffee shop every weekend and pay elderly uncles a lot of attention, even allowing their hands to wander.

The uncles, said to be beer-drinking patrons at the coffee shop, would also occasionally give tips to the maids.

A Shin Min reporter who visited the scene over the weekend saw around five foreign women accompanying the uncles to drink.

The women had heavy makeup on, and were clad in low-cut tops and short skirts. Two of them were also wearing leopard prints.

According to the reporter's observations, the women were seated beside the uncles, chatting and laughing.

One woman was seen bending her waist when speaking to someone, giving him a frontal view of her chest area.

An uncle also took somebody's hand and lightly stroked it, while another man caressed his female companion's hair. They appeared to be on intimate terms.

In addition, other male patrons who were not seated at the same table seemed to know the women well and flirted with them whenever they walked past.

The maids would usually stay a whole day until 7 or 8pm. According to those that Shin Min spoke to, they said they have witnessed the maids leaving together with the uncles at times.

View more photos of the reporter's observations in the gallery.