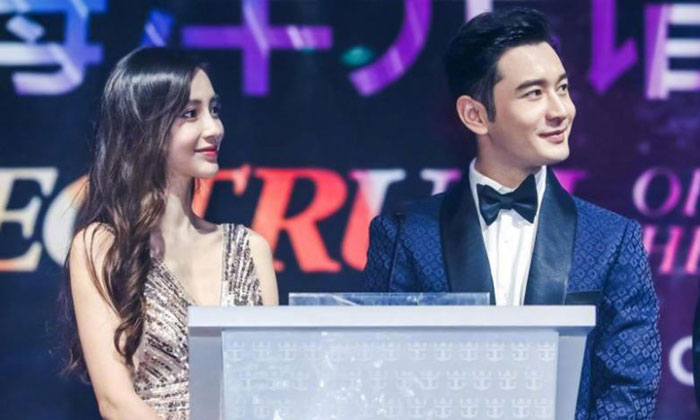 Two months after Chinese actress Angelababy and actor Huang Xiaoming refuted talk that their four-year marriage is on the rocks, rumours are once again flaring up.

Huang, 41, and Angelababy, 30, married in 2015 and have a two-year-old son, but have faced persistent scrutiny of their relationship due to the little interaction between them on social media.

Taiwanese model Lin Chi-ling and her husband, Japanese singer Akira, were reportedly dropped from the programme due to Akira's nationality.

Reports said that when the rehearsal was held in Huaian city in Jiangsu province on Thursday (Sept 12), Huang and Angelababy arrived separately. They were not seen together and there was little interaction between them backstage.

To add fuel to the rumours, eagle-eyed netizens noted the couple were initially put down as "husband and wife Huang Xiaoming and Angelababy" on a list of performers, but the phrase "husband and wife" later disappeared.

Angelababy has said in a recent interview with a fashion magazine that she would treat the rumours as a joke and has even shared them with her team, saying that they were like those in movie scripts. She added that she felt helpless sometimes when even acquaintances asked her if the rumours were true.

Related Stories
Huang Xiaoming dispels rumours of divorce with actress Angelababy: 'I also like baby'
"They make her look like an alien": What's up with these 'creepy' photos of Angelababy?
Photos of Angelababy's assistant kneeling at her feet to take off her shoes spark outrage
More About:
entertainment
celebrity
Angelababy
Huang Xiaoming
celeb couple
rumour