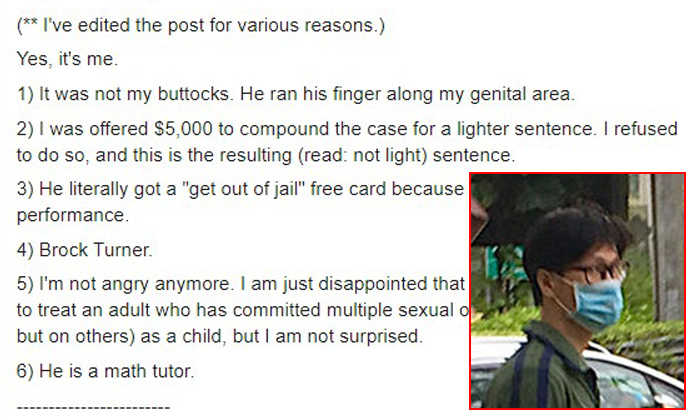 Prosecutors have filed an appeal against a district judge's decision to send an undergraduate for supervised probation for molesting a woman.

Law and Home Affairs Minister K. Shanmugam first revealed their intention to do so on Friday (Sept 27) - a day after the case was reported in the media - adding that he was surprised at the verdict.

Mr Shanmugam said Attorney-General's Chambers (AGC) officers disagreed with the verdict. "That is consistent with my views as well," he added.

The AGC told The Straits Times on Friday that it "has filed a notice of appeal to the High Court with respect to the sentence imposed on Terence Siow Kai Yuan".

In a Facebook post, the minister said he could understand how the victim and her parents must feel, adding that the victim's father had written to him.

The victim, who had identified herself openly on Facebook and in an interview with The New Paper, had said she was disappointed with the verdict, as she hoped the perpetrator would be given jail time instead.

Siow, 23, a National University of Singapore undergraduate, had pleaded guilty to one count of outraging the modesty of the woman on an MRT train. Another two similar charges were taken into consideration during sentencing.

He was sentenced on Wednesday to 21 months' probation. Prosecutors had objected to probation and asked for six weeks' jail but this was denied by district judge Jasvender Kaur.

She found that Siow had an inability to control his urges, and described the acts as "minor" in the nature of intrusion.

Citing reasons such as his academic results and the recommendation for probation, she said there "can be no doubt that there is extremely strong propensity to reform". His academic results show that he has the "potential to excel in life", said the judge.

After the verdict, the victim said that she is now mildly paranoid whenever she takes the train and feels uncomfortable wearing shorts in public.

Sexual misconduct will remain a problem until such incidents are taken seriously - even if they are perceived to be minor, she said.

She also asked if the case would send a signal to would-be perpetrators that they might get a lighter sentence as long as they have good grades.

The case had since ignited a storm of reactions, with many saying that the sentencing was inadequate, and querying why Siow's academic results were relevant to it.

In his post, Mr Shanmugam said that people are entitled to express their views, including their unhappiness with the verdict.

But he also noted that people should avoid casting aspersions on the judge. The judges are doing their duties to the best of their abilities, he added.

"We should now let the Appeal Court look at the matter," Mr Shanmugam said, adding that the courts will decide on the facts before them.

Even if society believes the law should deliver a different outcome after the appeal, it is not the courts' fault, he added.

It would then be a matter for Parliament to change the law.

Related Stories
NUS student who molested woman on train given probation: He has "potential to excel in life", says judge
Woman who was molested by NUS student on train disappointed with court's decision
It’s not about getting revenge or getting him expelled...I just don’t feel safe: Monica Baey
More About:
molest
court
probation
NUS
student
MRT
train