Prime mover driver arrested for suspected drink driving after crash at Boon Lay: He allegedly threatened to beat up passerby 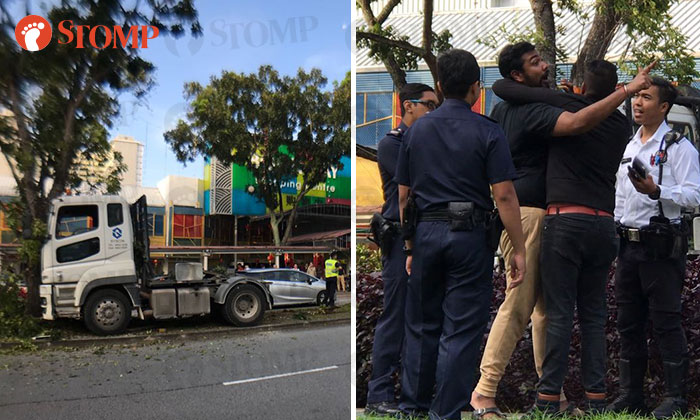 A driver was arrested for suspected drink driving after crashing a prime mover into a tree along Boon Lay Place on Sunday morning (Feb 4), at around 7.46am.

Stomper Jamie, who lives nearby, came across the sight and alerted Stomp to the incident.

According to Jamie, the driver also threatened to beat up a passerby who told officers that he was worried about the safety of his children after seeing the accident.

In the photos taken by Jamie, a white trailer appeared to have collided with a tree, and the impact of the collision cracked its windscreen.

An ambulance was parked behind the trailer.

Officers from the police and Singapore Civil Defence Force (SCDF) could also be seen in the vicinity as well.

Said Jamie: ”Many passersby took photos and videos with their phones.

"A man was telling some officers how he was worried about the safety of his kids as he lives in the area with his family.

"The driver then threatened to beat him up, saying that he was from a Tiong Meng Ko, a secret society which has its roots in Taman Jurong.

"He also had a verbal spat with two other elderly men.

"He was later given a breathalyser test by police officers. During the process, he also argued with the officers."

In response to a Stomp query, an SCDF spokesman said: "SCDF was alerted to a road traffic accident at 7.50am along Boon Lay Place.

"However SCDF's assistance was not required as no one was injured."

A police spokesman said: "On Feb 4, 2018 at 7.46am, the police were alerted to an accident involving a prime mover along Boon Lay Place.

"The 26-year-old male driver was arrested for suspected drink driving.

Stomp understands that the driver struggled with the paramedics at the scene.