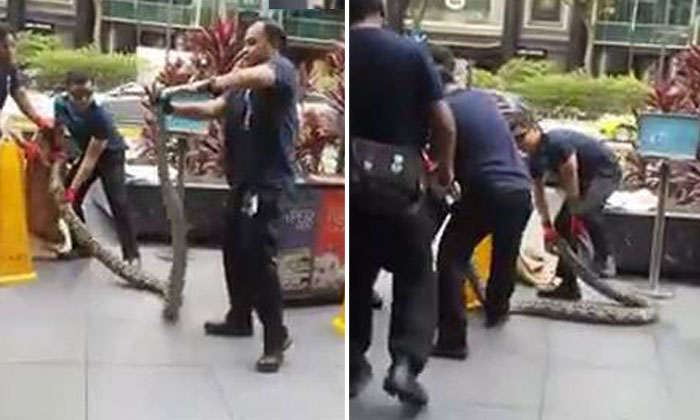 Pest control workers who were called in to catch a 3m-long python at Scotts Road on Jan 29 had not mishandled the snake, said the Agri-Food and Veterinary Authority (AVA).

Pest control firm Anticimex said in a Facebook post on Tuesday (Feb 19) that the AVA had completed its investigations into the alleged mishandling of the snake by its employees and shared what AVA had said in a statement.

The statement said: "AVA has completed investigation into the case and we have established that there was no mishandling by your staff who were activated to catch the python outside Tangs Plaza on 29 January 2019.

"Our investigation revealed as there was an immediate risk to public safety where the python was found at a location with high human traffic, your staff had to remove the snake as promptly and practicably as possible.

"However, it was unfortunate that one of your staff, Mr. Farhan, was bitten in the process.

"Hence, he had to resort to using necessary force to restrain the python.

"Mr. Farhan had acted in good faith to prevent further harm and injuries to himself as well as the public who were in close proximity."

Stomp previously reported on a video of the incident where Mr Farhan is seen getting bitten by the snake and proceeding to step on it to get the reptile to let go.

Python is adamant that snake should be the display for CNY on Orchard Road.

Posted by Fabrications About The PAP on Monday, 28 January 2019

He had to undergo minor surgery on his hand to remove the embedded snake tooth.

Experts, including a spokesman from The Animal Concerns Research and Education Society (Acres), had slammed the way the pest control employees had handled the python, calling it "terrible from start to finish".

At the time, the AVA said it was investigating the feedback it had received on animal cruelty, adding that cruelty to animals is an offence under the Animals and Birds Act.

However, Anticimex's Asian division's managing director and president Tony Hurst explained that the situation on Jan 29 was "highly volatile and unpredictable" and required the staff to react quickly.

On Tuesday, Anticimex said in its statement that its team "will continue to remain focused on our daily business, working with the experts in our field and avoiding distractions of commentary from spectators".

It added: "We will continue to empower our employees to take immediate and correct actions when needed to prevent and protect Singaporeans in their daily lives."

Related Stories
Man who got bitten by python at Scotts Road recovering after surgery to remove embedded snake tooth
Handling of snake at Scotts Road is "terrible from start to finish", says Acres
More About:
snake
python
injured
AVA