Passenger in dispute with cabby denies hitting him, gives his side of the story 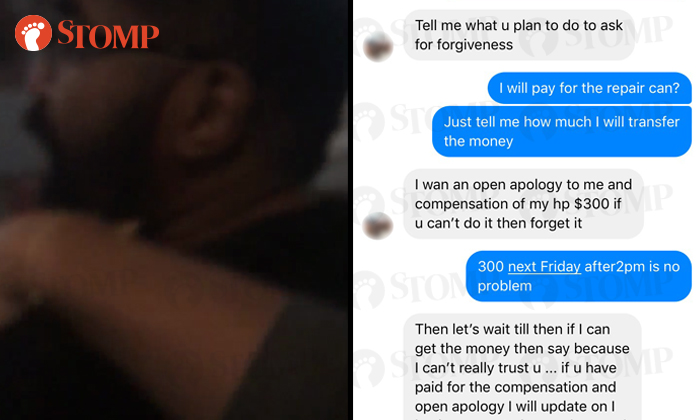 A passenger who allegedly hit a cabby and tried to evade his taxi fare has spoken up with his side of the story.

Stomper Chan, the cabby, shared how he had picked up the the man and his female companion at Tanjong Pagar Road at around 1.30am on Wednesday (Dec 12).

In the Dec 14 article, Chan told Stomp that he first dropped off the woman at Cantonment Close and then drove the man to his destination at Block 167 Bedok South Avenue 3, where a dispute occurred.

Chan also shared a video that he filmed, which showed the passenger swinging his arm at him.

In response to a Stomp query, the police said they were alerted to a case of voluntarily causing hurt at 1.41am and are investigating.

After the article was published, the passenger ('S') contacted Stomp with his side of the story.

S recounted what happened that night: "I was to send my friend home and get back home myself and await a funds transfer for payment.

"On my way back, I was replaying in my head about some news I had received. So I kept looking at the texts on my phone and saying 'son of a bitch' repeatedly as my rage grew.

"I assume that the cab driver thought I was referring to my friend, who is a single mum and someone whom I have the utmost respect for. He alluded to saying, 'you angry ah, cannot get tonight' and I said no.

"Anyone who knows me would be aware that I have the biggest respect for women as I was raised in a single-parent home with only a mother supporting my brother and myself.

"When we arrived at my place, I was still awaiting the funds to be transferred so I asked if we could smoke. The cabby opened the windows and I offered him a cigarette as well. He declined so I opened the door and started to light my cigarette.

"He then started screaming things about me 'not getting any' and that I was a loser or something to that effect.

"At that moment, he was completely in my face and I knew that if he kept coming and me being already agitated, I might do something stupid so I walked towards my void deck to smoke.

"What seemed like me hitting him was me pulling my arm away as I turned around to face him. I then did what I said and I went to sit down in my void deck.

"He claimed I was running away but why would I when I myself called the police?" 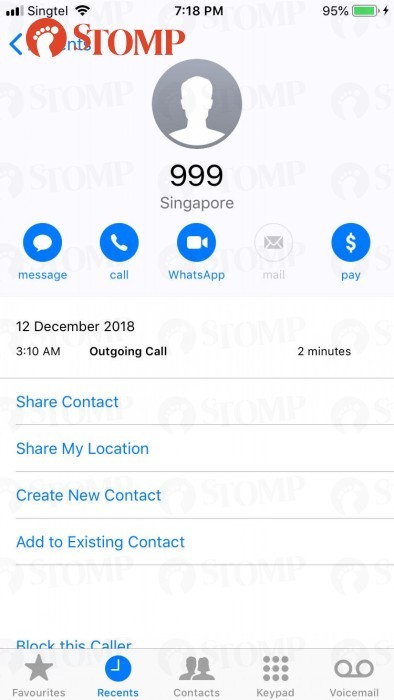 (Screenshot from S showing that he called the police)

Asked if he was drunk during the incident, S said he was "categorically not" and explained that he was on prescribed medication.

When asked if he had hit Chan, S told Stomp: "I flipped his cap off his head because he made a remark about my mum. I asked him to repeat it and he duly did, so as much as I wanted to really hurt him, I knew that wasn't the best course of action.

"I was aware that he was filming and I knew I had done nothing wrong, with the exception of the cap flip and pulling my arm away. Plus he kept saying I was going to be famous and I couldn't be bothered to entertain such juvenile actions."

Following the dispute, S reached out to Chan on Facebook.

The two apparently reached an agreement that S would make "an open apology" and compensate $300 for damaging Chan's phone by next Friday (Dec 21).

S added: "I just don’t want this to be a petty back-and-forth with the driver as I have no interest in that at all. I tried to resolve it as you can see, but he wanted things differently even after coming to an agreement."

View the conversation in the gallery.