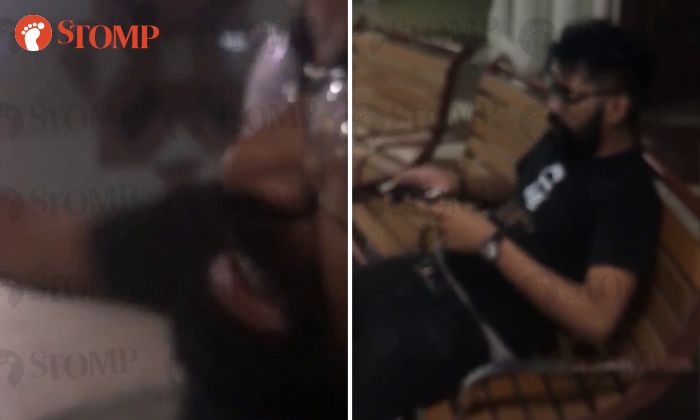 The passenger has contacted Stomp to give his side of the story.

Read the full update here: Passenger in dispute with cabby denies hitting him, gives his side of the story

A cabby tried to go after a man who had alighted from his taxi without paying the fare, only to allegedly get hit in the forehead and hand instead.

Stomper Chan, the taxi driver, said he had picked up the man and his female companion at Tanjong Pagar Road at around 1.30am on Wednesday (Dec 12) after accepting their GrabTaxi booking.

According to Chan, the $24.30 booking was made via the woman's phone, with cash selected as the payment mode.

He told Stomp: "The guy seemed drunk but I carried on with the journey. He was unsteady on his feet and there was a faint smell of alcohol."

Chan said that he first dropped off the woman at Block 19 Cantonment Close.

"I carried on with sending the guy to his destination at Block 167 Bedok South Avenue 3," he added.

"The guy kept mumbling in the taxi after the woman left and calling her names.

"When we arrived at his destination, the guy said he had no money to pay and tried to evade the fare.

"We had a five-minute argument in the taxi, during which he started smoking. He also started turning aggressive so I quickly called the police."

During this time, the man alighted from the taxi.

Stomper Chan, who started filming a video, went after him.

In the video, the man can be seen swinging his arm at Stomper Chan when told by the latter to wait for the police to arrive.

The man then went to sit down on a bench at the void deck.

He also denied hitting Chan and said: "Do not f***ing lie."

Chan said: "He hit me in the forehead and hand."

"This is the reason why taxi drivers typically reject picking up drunk passengers."

According to Chan, police officers who responded to the scene took his statement and advised the passenger to pay the taxi fare.

The Stomper added: "They asked him if he had anyone, like family or friends, who could help him to pay. Eventually, I think someone transferred money to him and he paid me via NETS."

In response to a Stomp query, the police said they were alerted to a case of voluntarily causing hurt at Block 167 Bedok South Avenue 3 at 1.41am.

Related Stories
Police investigating scuffle between cabby and drunk passenger at Balestier Road
Drunk guy who assaulted his driver and verbally abused police officers thought cabby took his phone
Police looking into incident of man who 'monkeyed' around and allegedly punched 62-year-old cabby
Men hurl vulgarities, challenge cabby to call police after one of them walks into taxi's side mirror
Allegedly drunk passenger gets into dispute with ComfortDelgro driver after refusing to alight cab
More About:
taxi
cabby
dispute
assault