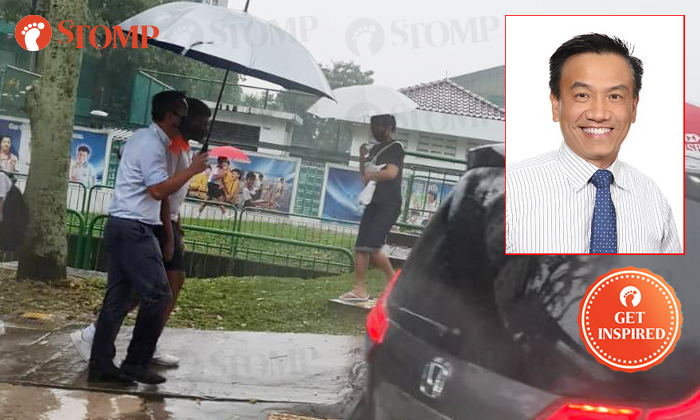 Despite the pouring rain and cold weather on Tuesday morning (Nov 10), a parent was left feeling warm and fuzzy thanks to a heartwarming sight that he witnessed.

Stomper Irenaeus Nathar was dropping his children off at St. Gabriel's Primary School in Lorong Chuan at around 7.20am when the incident occurred.

Irenaeus Nathar recounted: "It was raining heavily and the school principal took the initiative to come out of the school to shelter his students with an umbrella.

"He brought them into the school from the area not sheltered by the covered walkway.

"Another staff member had also been stationed at the entrance of Lorong Chuan MRT station to help the students get to the covered walkway.

Photos taken by Irenaeus Nathar show the principal of St. Gabriel's Primary School, Mr Martin Tan, sharing an umbrella with students and guiding them along the walkway.

The Stomper added: "I feel very inspired and grateful that my sons have a principal like him."

Related Stories
Bus captain, 72, shelters passengers from rain at every stop -- and has been doing so for 45 years
Driver helps wheelchair-bound elderly man to cross road during downpour at Toa Payoh
Foreign worker goes out of his way to guide blind elderly woman outside Caldecott MRT station
More About:
touching
inspiring
kind
kudos
heartwarming
students
teacher