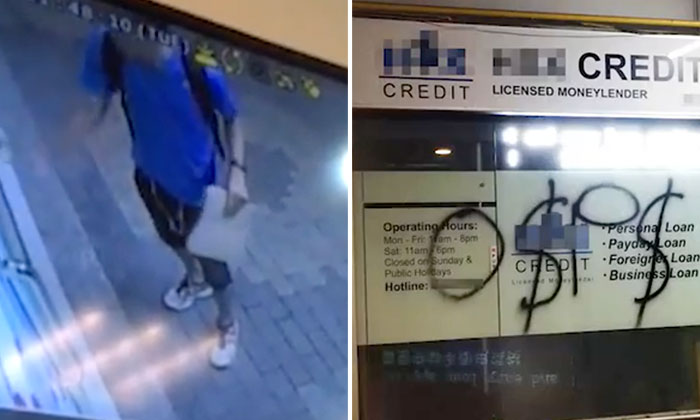 Over 10 licensed moneylender outlets island-wide were hit by vandals overnight, who threw paint, urine and even faeces at the shops.

Many of the shops were also spray-painted with the word, ’O$P$’ and police reports have been lodged, reports Lianhe Wanbao via Lianhe Zaobao.

It is understood that more than 10 shops were affected, including one stall each on French Road, Bishan Street 13, Cross Street, Toa Payoh Central, and another two at Ang Mo Kio Avenue 8.

When reporters visited the affected stall on French Road, paint residues were still visible at the front of the shop.

The owner, who did not wish to disclose his name, told reporters that he had been in the line for 10 years, and it was the first time his shop had been targeted.

He discovered that someone had spray-painted and pasted paper all over his shop on Tuesday (Jul 4), at around 9am.

There were also the private details of a customer who had borrowed from his shop.

He suspected that said customer had borrowed money from loansharks or other illegal moneylenders, who in turn, targeted his shop.

The owner also emphasised that he did not have any connections with the loansharks, and that the case has been handed over to the police.

A 34-year-old employee said that the vandals had spray-painted and pasted notices containing the details of the alleged lender at his shop on Bishan Street 13.

Another owner said that the incident had shaken the industry, and there were also rumours that some shops had been vandalised with faeces and urine.

He added that the consensus was that illegal moneylenders were behind the acts of vandalism, who were upset that their business was being 'stolen' by their legal counterparts.

In response to media query, a police spokesman said that the case is under investigation.