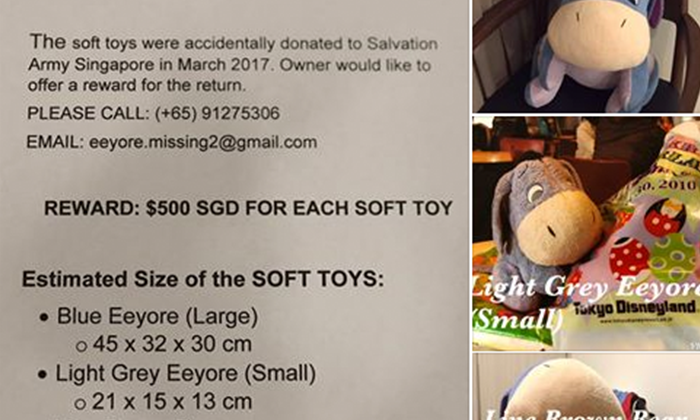 A netizen is offering $1,500 for the return of three soft toys that were mistakenly donated to the Salvation Army in March this year.

“The soft toys were accidentally donated to Salvation Army Singapore in March 2017.

“[The] owner would like to offer a reward for their return.

The owner also listed descriptions of the three toys -- a large blue Eeyore, a smaller grey Eeyore, and a Line brown bear - along with their corresponding dimensions.

According to an online website, a brand new Eeyore toy would only cost around $30 to $40, yet the owner has offered $500, leaving many netizens puzzled over his peculiar action.

A netizen deduced that the toys may hold tremendous sentimental value for the owner.

Another netizen speculated that there could be diamond rings hidden within the toys.

Reporters from Lianhe Wanbao subsequently tried contacting the owner but he declined an interview.

He did not wish to divulge the story behind the toys but said that so far, no one has come forth with the lost plushies.

The owner also added that he would be able to tell if the toys returned weren't his:

“Even if someone tries to deceive me with toys that look alike, I can definitely tell them apart.”

Related Stories
Owner offering $300 to anyone who finds his Chanel wallet lost near Alexandra Village Food Centre
Have you seen my pouch that was lost somewhere between Jurong and Yishun?
Seen this shoe bag that was lost at Lucky Plaza? You'll get a $50 reward for returning it
More About:
lost
reward