Not today, screams US woman as she fights off attempted rapist using skills learned from self-defence class 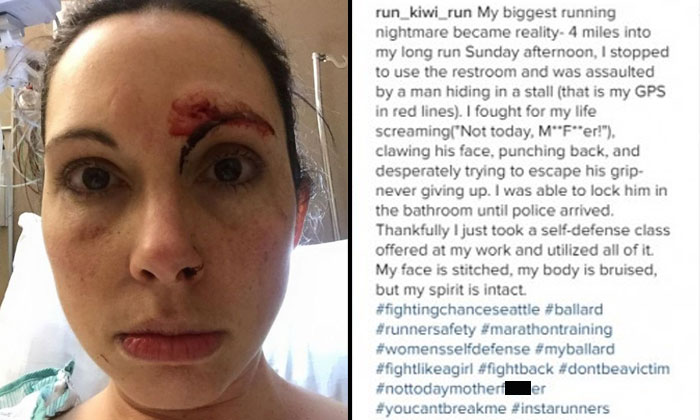 A woman from Seattle shared her amazing story of fighting off an attempted rapist while she was jogging.

She had used skills she picked up in a self-defence class just a few weeks prior to the incident.

Kelly had stopped to use the restroom in the middle of her 10-mile run in Seattle's golden Gardens Park when she saw a man standing behind her in the bathroom, reports Viral Thread.

He threw her to the ground and proceeded to repeatedly punch her before attempting to rape her.

“He lunged at me and I immediately just started to go into fight mode. All I kept screaming during the attack was, ‘Not today, motherf***er.’ I was screaming it like an animal. It was the most vicious savage part of my being. There was no way I was going to let this guy rape me," she told Inside Edition.

In another interview with ABC News, she said:

“All those little things that I learned in my life… how to punch and everything came back to me. I started to feel like I was going to lose consciousness, but I got another surge of adrenaline, and I reached for the door and was able to get out.”

After the assault, she realised her fitness tracker had captured the effort she had made to escape her attacker.

She subsequently posted a screenshot from the tracker and a picture of her bruised and bloodied face to spread awareness and remind other joggers to be aware of their surroundings.

The alleged attacker has since been identified as 40-year-old Gary Steiner who has a track record of assault against multiple women dating back from the 1990s.

Police reported that he said, "Kill me" when arrested for attempting to rape Kelly.

Kelly's bravery has inspired women all over the world via social media.

Related Stories
52-year-old man attempts rape and robbery at Orchard Road, all in the same day
Man in Malaysia arrested for allegedly raping his own mum who's a widow with 5 kids
24-year-old Taiwanese man admits luring aspiring model to abandoned mall before raping and strangling her to death
assault
attack
Rape
pervert
self-defence
fight
injured