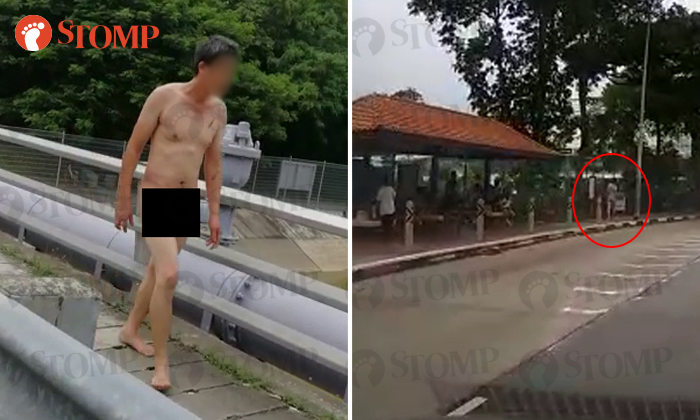 A man was spotted in the nude along Pasir Ris Drive 3 on Thursday afternoon (Oct 11).

Stompers TonTon and Anonymous contributed videos that showed the man walking down a pavement in his 'birthday suit'.

TonTon, who was in a van driven by his colleague when he filmed three videos, said he came across the man at around 3.45pm.

He told Stomp in a phone interview: "The man was walking along a canal and towards the D'Resort at Downtown East.

"He also went past a bus stop. There were students there as this was near a school and they turned their faces away when they saw him.

"The man appeared very focused and was looking straight throughout. He didn't seem to notice his surroundings or environment.

"Everyone was looking at him but he had no reaction."

Separately, Stomper Anonymous captured a video of the incident on his dashboard camera at about 3.40pm.

He said: "Just feeling shocked that someone would appear in the public like that.

"I called the police but apparently there were a lot of people who had already informed them.

Stomp understands that when police arrived at the scene, the man was already gone.

Stomp will not be uploading the videos.