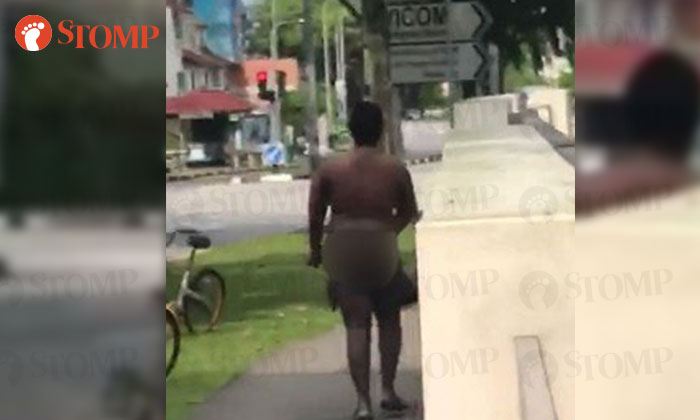 Stomper Alyssa spotted a naked man strolling outside the Amtech Building on 159 Sin Ming Road at about 10.35am on Saturday (July 7).

Alyssa told Stomp in a phone interview that she works in the building and had gone down to take a smoking break.

She then heard someone calling her: “Hey! Hey! Hey, pretty!”

When she turned around, Alyssa had the shock of her life. It was a naked man.

He even allegedly asked her if she had seen a naked man before.

Alyssa said that she immediately turned away. She started taking a video of the man as he walked away.

According to Alyssa, the man appeared to walk off in the direction of the Land Transport Authority building on 10 Sing Ming Drive.

“I’m a Malaysian national, and I just started working here in Singapore since October last year.

“He looked like he was carrying some sort of apron in front, but I cannot be sure because I immediately looked away after realising that he was naked.

“I waited for him to walk away before taking a video because I was afraid that he might attack me if he found out that I was filming him."