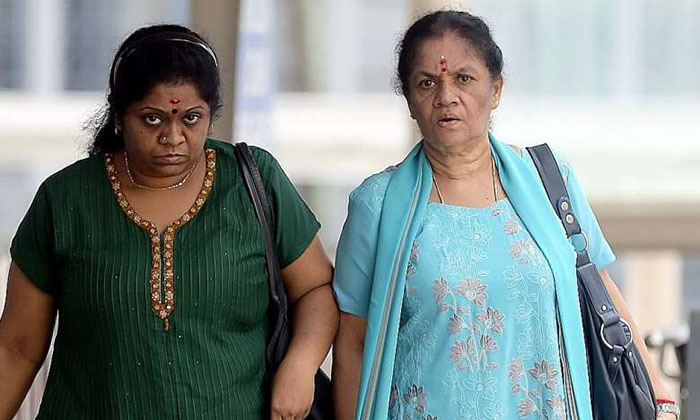 They slapped their maid, pinched her mouth, jabbed her foot with a metal prong and even used the back of a knife to hit her hand. Whenever the bruises showed, the maid, who was left scarred and with a permanent disability in her left ear, was forced to wear a face mask.

Yesterday, the abusers, a 65-year- old woman and her daughter, were jailed for hurting the maid.

Housewife Anpalaki Muniandy Marimuthu was convicted of six charges of hurting Ms Sriyatun, 27, and imprisoned for 16 months. Her daughter, 43-year-old warehouse supervisor Jayasheela Jayaraman, was found guilty of three charges, sentenced to 12 months' jail and ordered to pay $840 in compensation.

The duo are appealing.

District Judge Jasvender Kaur said there was a clear pattern of abuse each time the victim had done a wrong. She said Ms Sriyatun has a "cauliflower ear", a permanent disability, due to both women slapping her left ear.

The Indonesian woman, who has a six-year-old son, testified that the pair pinched her swollen ear before it healed, and that it hardened.

Some time in 2013, Jayasheela grabbed her breast, squeezed and twisted it for being slow in her work.

On Oct 24 that year, a day before Ms Sriyatun decided to flee, Jayasheela dragged her into the bedroom, demanding to know why she had disturbed her then seven- year-old son. She pinched the corner of the maid's mouth and knocked her head twice with her hand. The assault caused her mouth to bleed and left a 2cm teeth imprint over her inner upper lip.

The court heard Anpalaki hurt Ms Sriyatun with household objects on a few occasions. Once, in November 2012, she jabbed the maid's foot with the sharp base of an aluminium prong for taking her son's shoes into the unit while she was praying. The maid's foot bled profusely and she was left with a 2cm scar.

In another incident in 2013, Anpalaki used the back of a kitchen knife to hit the maid's left hand and a rolling pin to hit both her hands a few times. She also used a wooden prong to hit her thighs.

When police visited the family's unit on Oct 25, 2013, they saw Ms Sriyatun wearing a face mask and shower cap. She said that whenever she was hit by either of them or had an injury, she was made to wear the mask.

Deputy Public Prosecutor James Chew said the maid felt so mentally tortured that she tried to kill herself. "The fact that the accused persons had egregiously abused their authority and exploited the vulnerability of the victim is a significant aggravating factor that warrants a strong deterrent sentence," he said.

The maximum penalty for causing hurt to a domestic worker is three years' jail and a $7,500 fine per charge.