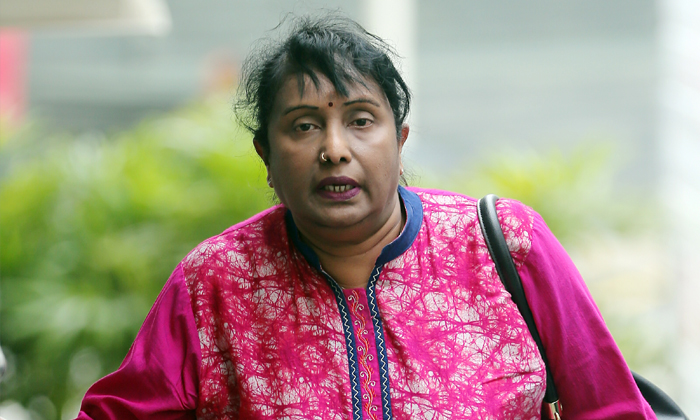 An army warrant officer hit, pinched and slapped her new maid - because the latter did not perform chores, including ironing her uniform, up to her standard.

K. Rajakumari, who turns 56 on Tuesday (Sept 6), also abused her maid with caustic remarks, called her "stupid", and ignored her multiple pleas to be sent back to her agent.

After a 14-day trial, Rajakumari, who has since retired from the army after 35 years, was on Monday (Sept 5) found guilty of five charges of causing hurt to Indian national Sargunam Jeeva, now 40, at her Canberra Drive condo between February and March 2012.

Deputy Public Prosecutor Sruthi Boppana and defence lawyer A.P. Thirumurthy will argue on an appropriate sentence before District Judge Imran Hamid on Oct 5. Rajakumari faces a maximum penalty of three years' jail and a $7,500 fine for each of her five charges.

Rajakumari had picked the maid up, checked her belongings and removed a Ministry of Manpower pamphlet and other materials with contact details that she had written down.

Ms Jeeva was to be paid $350 a month, without any off days. She had studied only up to the 8th grade and could not speak English.

By the second week of February 2012, Rajakumari would scold her regularly using caustic remarks. But the abuse got more physical.

Late at night one day in February, Rajakumari hit Ms Jeeva once on her back, just below the neck. Later that month, the employer scolded the maid for taking a long time to answer the door, called her "stupid", and then used her fist to knock the maid's forehead.

On the night of March 3, 2012, after Ms Jeeva had ironed Rajakumari's uniform, the employer threw it onto the dresser and chided the maid for not knowing how to iron properly despite being employed for a month. Rajakumari then hit Ms Jeeva on her left upper arm with a plastic hanger so hard it broke.

The maid cried loudly, but Rajakumari continued scolding her. When the maid told her employer she could send her back to her agent if she was not satisfied with her work, Rajakumari said she would not let her go, as she had paid to employ her.

The next day, at about 7.30pm, Rajakumari dropped a cup in the kitchen while picking it up from a rack. She pinched Ms Jeeva's left arm thrice while scolding her for not stacking cups properly.

On the evening of March 5, Rajakumari told Ms Jeeva to heat some briyani from the previous day. But the food had gone bad and the maid was scolded and slapped hard on her face. Rajakumari then pulled Ms Jeeva by her hair and pushed her against some window grilles, causing her face to hit the grilles.

The maid fell down and, as she tried to get back, Rajakumari kicked her waist. Ms Jeeva told the employer she "could not withstand this torture anymore... please send me back to the agent's house". But Rajakumari told her this was not possible.

That night, Ms Jeeva gestured to a maid in a neighbouring home for help and the latter called the police.

A policeman later heard Rajakumari tell Ms Jeeva in Tamil: "Please forgive me, I won't do this anymore, please don't tell anyone about the abuse."

Unknown to Rajakumari, the officer could speak the language. She later admitted hitting Ms Jeeva to him.

Ms Jeeva has since completed a two-year contract with another employer, who has gone on to renew it.

Related Stories
Man molested maid, said he wanted to have sex with her, and even hit wheelchair-user wife
60-year-old man slashes sleeping maid with parang in Toa Payoh home over grudge: 'I see the devil in you'
Employer, married with children, bought 'spy cam pen' to film maid in shower
More About:
maid
abuse
court