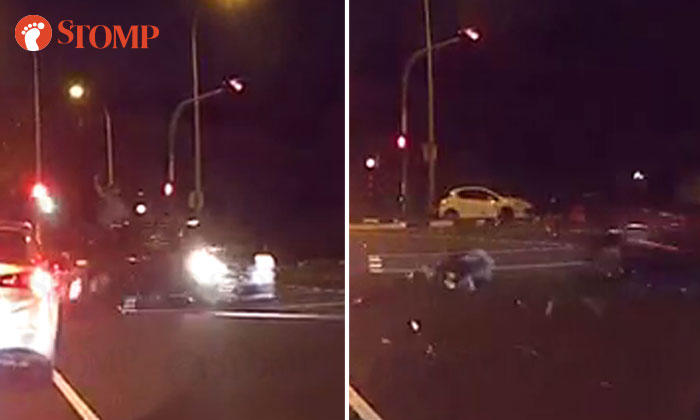 An 18-year-old motorcyclist was taken to hospital after he was involved in an accident with two cars along Bukit Batok West Avenue 5 towards Brickland Road on Monday night (Feb 11).

Stomper Jason alerted Stomp to the accident and shared a video he had taken from his car's dashboard camera.

In the video, a car is seen beating the red light before hitting the rider, causing him to fly off his bike and land on the road.

Several pieces of debris are seen being flung in all directions as well.

Gary told Stomp that his car suffered minor damages from the debris.

"Luckily for the biker, an ambulance came about two minutes later and paramedics attended to him," he said.

In response to a Stomp media query, a police spokesman said that they were alerted to the accident at about 9.34pm.

The motorcyclist, an 18-year-old man, was conscious when taken to Ng Teng Fong General Hospital, he said.