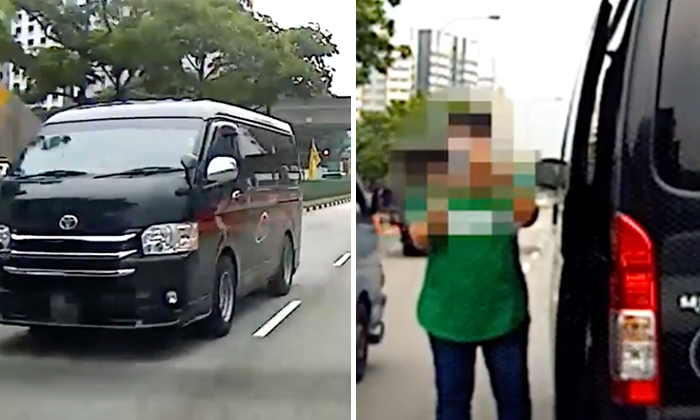 A minibus driver and female bus attendant not only verbally insulted, but also played the ‘braking game’ with a motorist, causing her to sustain a neck injury after being forced to engage her emergency brakes.

The incident happened along Sengkang East Way on Wednesday (Oct 25) at around 2.50pm, and the sequence of events was recorded on the driver’s dashboard camera.

The victim, Ms Guo, 31, told Lianhe Wanbao that she was driving along Sengkang East Way and there were some ongoing road works.

As she felt that the road was too narrow with the barricades, she alighted her vehicle and asked the workers to let her through before moving off.

The minibus driver who was behind her kept sounding his horn and attempted to overtake her vehicle.

According to Ms Guo, the minibus driver swiftly overtook her from the right as soon as she moved off, and begun a serious of dangerous taunts, while ferrying a bus full of students.

He continually jammed on his brakes while they were just a few metres apart, forcing Ms Guo to do an emergency brake and injuring her neck in the process.

“There were no vehicles in front of the minibus, but the driver kept jamming on his brakes.

“I believe that he was unhappy with me stopping my car earlier.”

What was more unbelievable, the bus attendant alighted to shout at Ms Guo after the reckless taunts.

“I was fuming by then.

“They were in the wrong, yet they were so cocky.

“I told them that I intended to call the police, and then both of them ran back to their minibus and drove off immediately.

“The bus attendant also flashed her middle finger at me.

”Ms Guo subsequently lodged a police report over the incident.

In response to media queries, a police spokesman confirmed the case and said that investigation was ongoing.