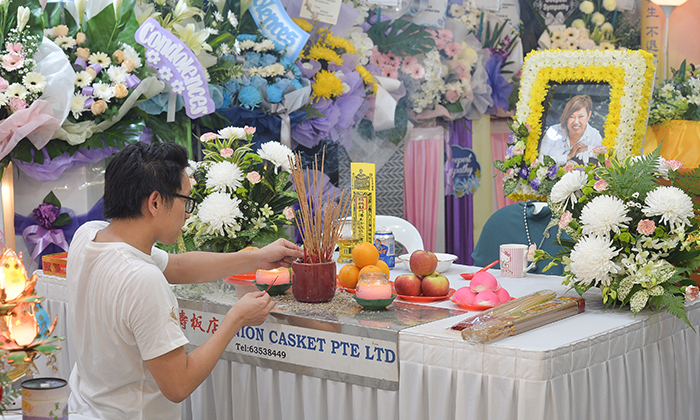 It was supposed to be a routine expedition off Mersing, one that some of the members of the kayaking group had gone on before.

But what the group of 15 paddlers and one boatman did not expect when they launched their kayaks on Aug 8 was to run into unusually strong winds and choppy seas.

It was so bad that the guide of the kayaking group ended up on a different island from the rest of the group.

Worse, two members of the group, Madam Puah Geok Tin, 57, and Mr Tan Eng Soon, 62, were nowhere to be found. Their bright green kayak was found on Aug 13.

And Madam Puah's body was discovered a day later by a fisherman. Mr Tan is still missing.

Last night, at the wake for Madam Puah, a kayaker who was with her on the expedition gave The Sunday Times an account of what happened while they were out at sea. A few had apparently turned up on Friday as well to pay their respects.

The kayaker, who wished to be known only as Mr Goh, said that before they set off from Mersing that morning, their guide and team leader gave them a briefing in which he told everyone to "try to stay together" during the expedition. The group consisted of eight kayaks, including one single-seater, and a motorised safety boat.

Mr Goh, who maintained a stoic front yesterday, told ST that members of the group - who were mostly in their 40s and 50s - had varying abilities and kayaking experience, and thus moved at different speeds during the trip.

"Before we started, (the team leader) did ask us to stay together. But some of them are very strong, so we tend to move very fast."

The gap between the kayaks grew as the trip went on. Then, the sea conditions took a turn for the worse, and they ended up in two groups - one with three kayaks and the other with five. Soon, they could barely see one another.

"The wind and the current were very strong," he said.

"The conditions were so bad, you couldn't afford to stop. If you stopped, you would drift away.

"We kept tossing left and right; it was terrible. The only way to maintain stability was to keep paddling."

ST understands that the group was headed for Pulau Mertang Timur, a small island about 24km north-west of Mersing, where they had planned to rest for the night.

Mr Goh and his wife were in the first kayak to reach the island. The safety boat, which had stored the group's tents and other supplies, was already anchored near the island when they arrived.

"The next kayak came about 15 minutes later," said Mr Goh.

Mr Goh added that he saw their guide had somehow ended up on another island nearby instead.

The team realised that something was wrong only when they finally managed to regroup on the island and, at 5.40pm, realised that Mr Tan and Madam Puah were nowhere to be seen. That was when two members of the group went out in the safety boat to pick up their guide and his kayaking partner, and the four of them combed the waters in search of Madam Puah and Mr Tan.

The safety boat gave up the search around 8pm, after around two hours, when it started getting dark.

Mr Goh pointed out that they had been unable to phone for help as their mobile phones had no network signal on the island.

The group then spent the night on the island and, the next morning, the team leader - Mr Goh Khee Wei - went out to the mainland on the safety boat to get help.

A police report was made at 10.30am, and a search and rescue team was sent out to look for the missing persons at 3.30pm. That meant that around 22 hours had lapsed since the duo were first noticed to be missing.

It was only four days later that the missing duo's bright green kayak was found by a fisherman in Kuantan waters, with all their belongings packed inside still intact.

Meanwhile, the Malaysian authorities are continuing search and rescue efforts for Mr Tan.

Mr Vincent Wong, vice-president at the Singapore Canoe Federation, said that, when organising kayaking expeditions in open water, planning is crucial. "Many vendors in Singapore might organise kayaking trips, but it is important to have risk-assessment procedures and backup plans for safety. Vendors also need to make sure that, for long sea journeys, all members must have the appropriate competency before setting off," he added.

Mr Wong also told ST that trips he had organised involved a recce of the area before the journey, and that permits would be obtained to notify the coast guard and relevant authorities that they would be paddling in their waters. There would also be a safety boat sailing alongside the group, in case of an emergency.

"Safety boats are meant to support paddlers during an expedition. In the event of any emergency, the safety boats can come to pick up paddlers in distress, and bring them back to shore," he said.