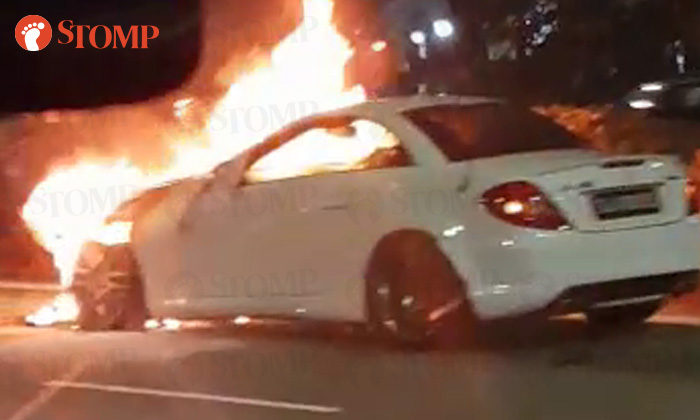 A Mercedes caught fire on the Pan-Island Expressway (PIE) towards Changi Airport near the Jalan Eunos exit at around 7.30pm yesterday (Oct 3).

Several Stompers shared videos of the incident with Stomp.

In a video shared by a Stomper, a stationary white Mercedes can be seen on the first lane of the expressway with flames emanating from its bonnet.

A motorcycle can also be seen parked in front of the car.

"The traffic was only slightly heavy when I came across this," said the Stomper.

"It took me about 10 seconds to bypass the incident."

In another video, taken from the opposite side of the expressway and shared with us by Stomper Ah Boy, flames and smoke can be seen billowing into the air.

The car is hidden from view by plants in the middle divider of the expressway.

Stomper Dean also shared a video as well as an audio clip with Stomp advising other drivers to avoid the area as there was a heavy traffic jam at the area.

"PIE towards Changi Airport, on Lane 1 before Jalan Eunos exit, there is a heavy traffic jam going in both directions," he said.

The video, shared with Dean by a friend, showed the incident taken from the third lane of the expressway heading towards Changi Airport.

Stomper Anna also shared a video of the incident which was taken from a window located beside the expressway.

In response to a Stomp media query, the Singapore Civil Defence Force (SCDF) said: "SCDF responded to a fire along the PIE at about 7.35pm.

"The fire involved a car and was extinguished by SCDF using one compressed air foam bag pack, and one hose reel jet.

Stomp understands that the driver of the Mercedes was first alerted to smoke coming out of her bonnet by a motorcyclist, before stopping her vehicle.