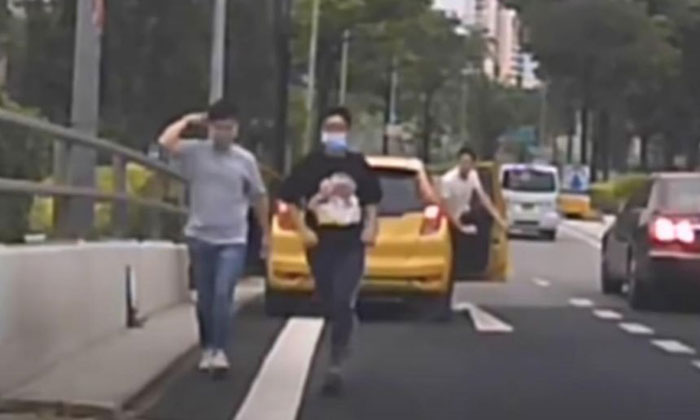 The drivers and passengers of two cars which were involved in three recent incidents are under investigation for dangerous driving, harassment and touting.

The incidents were recorded on video, and the footage was then posted on various social media platforms.

In the latest video taken from an in-car camera and posted online on Sept 22, a yellow Honda and a black Audi are seen stopping along the slip road of the Pan-Island Expressway towards Kallang Bahru after an accident between a van and a car on July 6.

The yellow and black cars were not involved in the accident, the police said on Thursday (Oct 7).

Four men in the yellow car are under investigation for allegedly harassing a male driver involved in the accident, the police added.

Two other men from the black car are being investigated for their suspected involvement in touting for business.

In another incident on Sept 15 in New Upper Changi Road, the yellow car, driven by another man, 22, was allegedly involved in a road rage incident with a bus driver. The incident was captured on video and subsequently posted on social media.

"In the video, the yellow car allegedly braked abruptly and repeatedly, causing the private bus to collide into it," said the police.

In a video seen by The Straits Times, the yellow car drives off very slowly on a green light, stopping and starting repeatedly.

The driver has been arrested for dangerous driving and his driving licence suspended with immediate effect, the police said.

A male passenger, 24, in the car is being investigated for intentional harassment.

In the third incident, the black car was involved in a chain collision with four vehicles in Upper Serangoon Road.

"The 25-year-old male driver had allegedly stopped behind other vehicles that were involved in a separate accident to solicit business when his vehicle was hit from behind by another car," said the police.

A video seen by ST shows the black Audi weaving quickly in and out of traffic on at least four occasions, said to be between Sept 14 and Sept 18.

He has also been suspended from driving.

The police said they take a serious view of motorists who drive recklessly to put themselves and other road users in danger, and will not hesitate to take firm action against them.

Those found guilty of using expletives or intentionally causing harassment to another person can be fined up to $5,000.

Those found guilty of stopping their vehicle on an expressway road shoulder without valid reason can be fined up to $1,000, jailed for up to three months, or both.