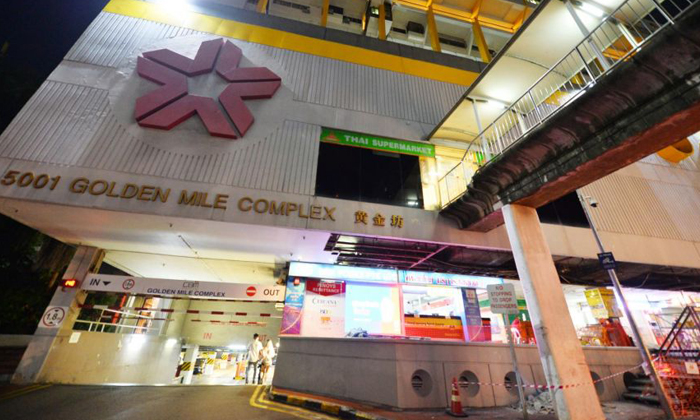 A night out for a tourist in Singapore ended in a terrifying ordeal after she was pushed into a stairwell, molested and prevented from escaping.

The Thai national was rescued by a man who happened to be nearby with his wife.

Her assailant, Tan Ee Hong, was sentenced on Wednesday (April 28) to 2½ years' jail and given three strokes of the cane.

Tan, who is 25 and a Singaporean, pleaded guilty to one count of aggravated outrage of modesty.

Another similar charge and one count of using criminal force were taken into consideration by District Judge Christopher Goh during sentencing.

The 27-year-old victim cannot be named owing to a gag order to protect her identity.

Court documents stated that the woman, who spoke only simple English, was with her friends at Golden Mile Complex on Nov 23, 2019.

The group had gone to a restaurant at the shopping mall after a late night out and left at about 7.30am, when the victim then took a call from her mother.

She later lost sight of her friends and thought they might have gone to a nearby karaoke lounge.

Tan, who was working then as a part-time retail assistant for a clothing store at the shopping mall, approached her. He told her that he had a shop upstairs and asked if she would like to see it.

The woman then asked about her friends, to which Tan replied that they "would follow".

The court heard that due to her poor command of English, the victim thought the shop was a karaoke lounge and that her friends might be there.

But realising her mistake when they arrived at the clothing store, she left immediately. Unhappy, Tan followed her to a lift lobby, grabbed her arm and tried to take her phone. A struggle ensued.

Tan later pushed the victim into a nearby stairwell after an earlier attempt to do so failed.

He then trapped the woman in a corner of the stairwell with his arms around her, and molested her.

The woman later broke free of his hold and opened the door of the stairwell to escape.

But Tan dragged her in again, during which she nearly fell through the staircase railings, and straddled her. He then kissed her forehead.

Another woman, who had just exited a nearby lift with her husband, noticed the victim's belongings strewn on the floor of the lift lobby and heard her crying from behind the stairwell's door.

The husband opened the door and tried to help her but Tan continued to hold on to the woman, claiming that he was trying to "help her".

The victim then called the police with the help of the good Samaritan, who also explained what had happened.

Court documents said the victim was later taken to the hospital, where she was found to have injuries such as minor scratches on her knees and shin.

Deputy Public Prosecutor Chong Kee En said in his submissions that "it was only completely fortuitous" that the woman was rescued.

"The accused, on the other hand, reflected poorly on Singaporeans and has no excuse for his deplorable conduct," the DPP added.

Tan's jail term has been deferred to May 24.

He could have been jailed for between two and 10 years, and caned for the offence.

Related Stories
Ex-cabby molested female passenger who fell asleep in back of taxi
46-year-old man who molested elderly cleaner after she gave him money to buy food gets jail
SMU molestation trial: Accused says 'only both of us know how we were getting more intimate'
More About:
molest
court
tourist