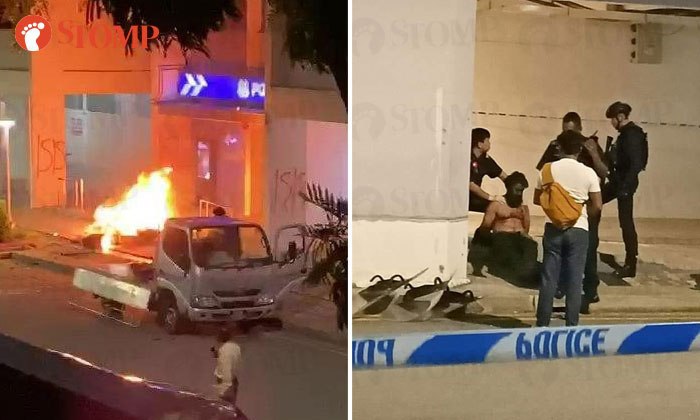 Wanting to express his anti-government views, a safety officer hatched a plan to burn down a police station to draw the public's attention to his grouses.

He also used an axe to smash glass panels at the police post located on the ground floor of Block 105 Towner Road and spray painted "ISIS" - an abbreviation for the Islamic State in Iraq and Syria terrorist group - on seven pillars in the vicinity.

The 31-year-old Singaporean was sentenced on Wednesday (June 30) to 3½ years' jail and nine strokes of the cane.

He had earlier pleaded guilty to one count each of vandalism, causing mischief by fire and being in possession of a weapon.

No one was injured during the rampage but a district court heard that his offences caused some $20,000 in damage to the area and a nearby car.

In January last year, Sivaprakash wanted to give "expression" to these negative sentiments and initially considered staging a protest and passing around flyers.

That, he later felt, would not create the effect he desired and he decided on a different way to express his anti-government views.

He picked the police post as a target because it was near an MRT station and he felt his actions could "easily gain" the attention of passers-by.

Sivaprakash's plan included smashing police cars if they were present, breaking the glass panels of the police post, giving a speech when a crowd formed and allowing himself to get arrested so that he could air his grievances in court.

He was, however, silent during the court proceedings on Wednesday.

After sketching out his plan in a notebook, Sivaprakash went to Mustafa Centre in Little India in early March last year.

He bought various items from the shopping centre, including trash bags, cans of deodorant spray, mattresses, an axe and a sledgehammer.

Sivaprakash later packed his old clothes, some motorcycle batteries and the deodorant cans into five pieces of luggage.

He was transporting the items on a lorry from his home on March 13 last year when his brother confronted him.

Sivaprakash initially lied to his sibling about his intentions but finally admitted that he wanted to "burn the NPP".

His brother, who tried but failed to dissuade him, then contacted one of Sivaprakash's friends for help. But the friend's advice also fell on deaf ears. 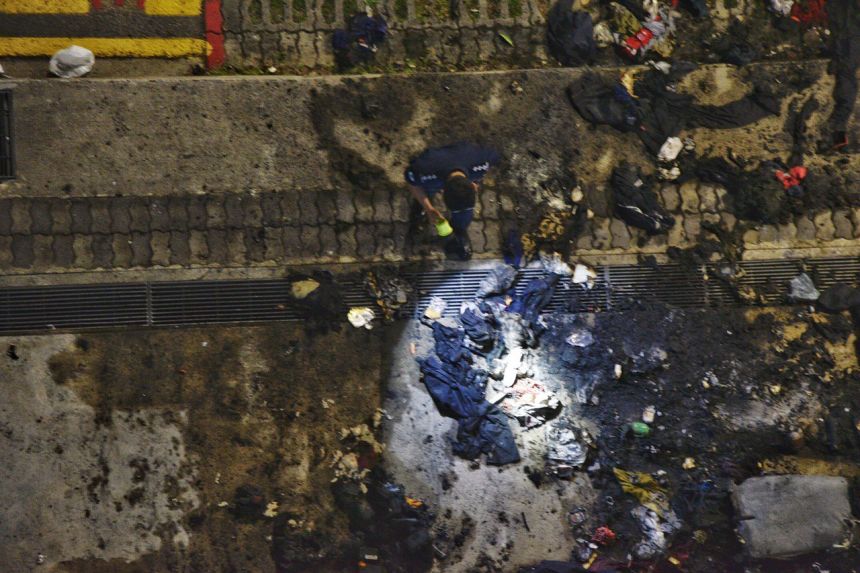 An aerial shot of debris and damage from the fire outside the police post. ST PHOTO: DESMOND WEE

Sivaprakash, who was intoxicated after drinking copious amounts of alcohol, left the two men that evening and drove to the NPP with the pair following closely behind.

He arrived at the NPP at around 11pm and used an axe to smash its glass panels. His brother asked Sivaprakash to stop but the latter ignored his pleas.

After that, Sivaprakash unloaded the items from the lorry, placed them near the NPP and started a fire that grew to be about 2.5m wide, generating heat of up to 670 deg C.

The explosions alarmed the residents and witnesses, the court heard. He also spray-painted "ISIS" on the pillars. 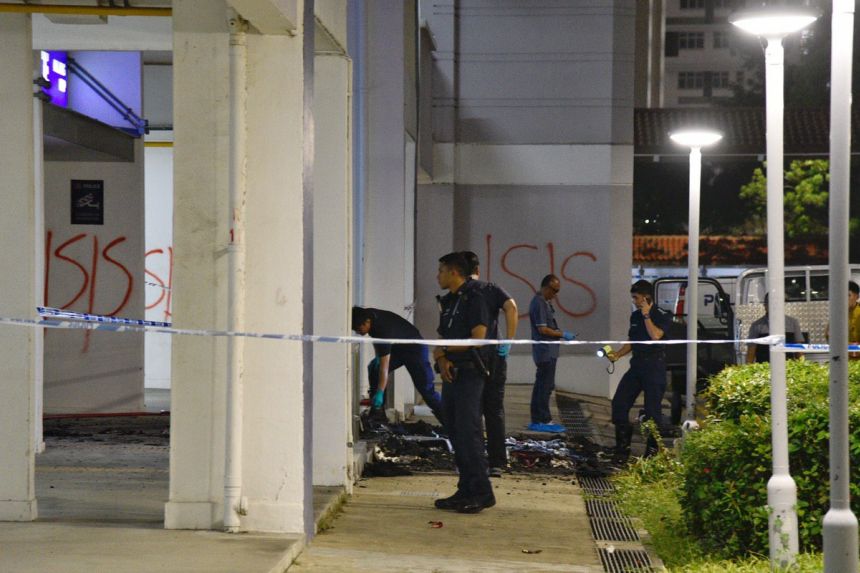 Police and SCDF at the scene of the vandalism and explosion. ST PHOTO: DESMOND WEE

The DPP said: "While he did not personally support the said terrorist group, the accused spray painted 'ISIS' on the pillars of the HDB void deck knowing that this would create terror and alarm to those who witnessed this."

He did this to signal to the Government that there may be a backlash from those the accused perceived to be poor and oppressed, DPP Foo said.

The police were notified at 11.09pm. Police officers and firefighters from the Singapore Civil Defence Force arrived at the scene about 10 minutes later.

The fire was extinguished after about 10 minutes and police arrested Sivaprakash, who was found sitting on the ground nearby.

He was bare-bodied and dressed in military trousers with boots. He also had green and black camouflage cream on his face.

In his submissions, DPP Foo said Sivaprakash has delusional disorder and is a "dangerous offender".

Quoting a medical report, he said the accused continues to labour under the delusional belief that the State is somehow "corrupt".

"The accused unfortunately fails to accept the very real and indisputable fact that his abnormal behaviour emanates from a psychiatric disorder. This further augments the risk of his maladaptive, criminal and potentially dangerous conduct in future."

For vandalism, an offender can be jailed for up to three years and receive up to eight strokes of the cane.