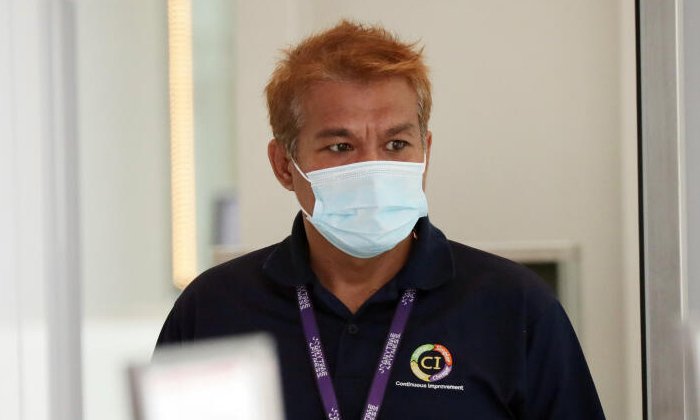 A man unlawfully left his Pasir Ris home during the circuit breaker period last year and went to a staircase landing of a Bukit Batok block of flats, where he defecated in an incense burner tin.

The court heard that the tin was "of religious significance" to the 27-year-old victim who confronted Zulkeflee Ab Razak, 47, when he spotted the older man with his pants down.

The jobless offender responded by hurling vulgarities at the victim before fleeing.

Zulkeflee was sentenced on Thursday (April 29) to seven weeks' jail and a fine of $300.

He pleaded guilty to one count each of committing an act of mischief, theft and an offence under the Covid-19 (Temporary Measures) Act.

Singapore imposed the circuit breaker between April 7 and June 1 last year to curb the spread of Covid-19.

Despite this, Zulkeflee left his home some time before 3pm on April 27 last year and went to Geylang, where he wandered around for about three hours.

He then boarded a bus to Bukit Batok and walked around the neighbourhood.

Zulkeflee said that he felt a need to relieve himself when he was near the victim's block. He then decided to take a lift to a random floor and committed the offence.

Deputy Public Prosecutor Andre Ong said: "The victim was in his living room when he spotted the accused coming from the lift and heading to the staircase landing.

"The victim felt suspicious as that was the first time he saw the accused."

The younger man followed Zulkeflee and spotted the latter defecating into the tin.

When confronted, Zulkeflee fled and the victim alerted the police at around 4.40pm that day.

He made a second report about four hours later after spotting Zulkeflee sitting on a bench.

In an unrelated incident, Zulkeflee also stole a pack of cigarettes valued at $11.20 from a convenience store in Tampines at around 8am on March 27 last year.

For committing an act of mischief by defecating in the tin, he could have been jailed for up to two years and fined.

For theft, an offender can be jailed for up to seven years and fined.