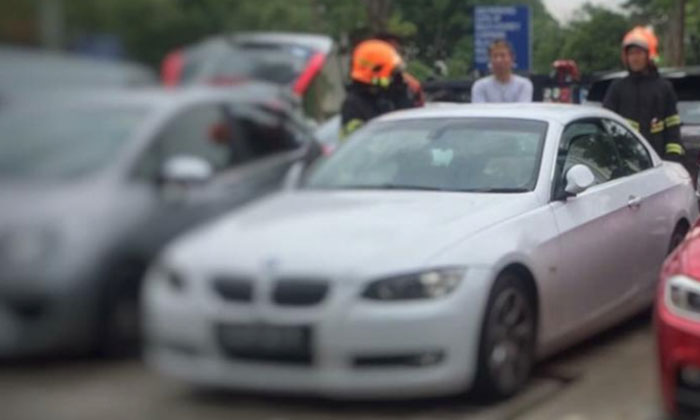 To save his baby daughter accidentally locked inside his BMW, a man smashed the car window with a hammer.

The incident happened at the carpark next to the Holland Village Market on Wednesday (March 21) at 11.50am.

According to Lianhe Wanbao, the couple is believed to have gone for a test drive on a new car, leaving their daughter with the domestic helper.

Pushing the baby on a pram, the domestic helper returned to the couple’s car and set the girl down in the rear passenger seat.

She then placed the car key in a bag on the front seat, while leaving the left car door open.

However, the domestic helper accidentally bumped against the door while handling the pram, thus shutting it.

The auto lock on the car came into effect, trapping the baby inside, along with the key needed to open the doors.

Madam Huang, who works as a vendor at the hawker centre nearby, told reporters that she had heard a woman, believed to the child’s mother, screaming for help.

She said that the couple went searching for help everywhere to open the door.

Madam Huang worried that the baby could be in danger quickly handed a hammer to the man.

“He was flustered and wanted to break the rear window screen at first.

“However bystanders told him that doing so could end up hurting the baby.  So he changed his mind and shattered the window at the driver seat.

“He then unlocked the car and retrieved his baby.”

Madam Huang revealed that the incident lasted about 20 minutes, and officers from the Singapore Civil Defence Force (SCDF) arrived at the scene about 10 minutes later.

In response to media queries, an SCDF spokesman confirmed the incident and said that no one was hurt.

Related Stories
KKH responds to Stomp on couple's FB posting claiming lapses by doctor
Kids shouldn't be allowed to play on train: Girl runs down aisle while boy climbs pole
Will you still have mood to eat -- after seeing boy step all over table at Woodlands kopitiam?
More About:
baby
Holland Village
parents