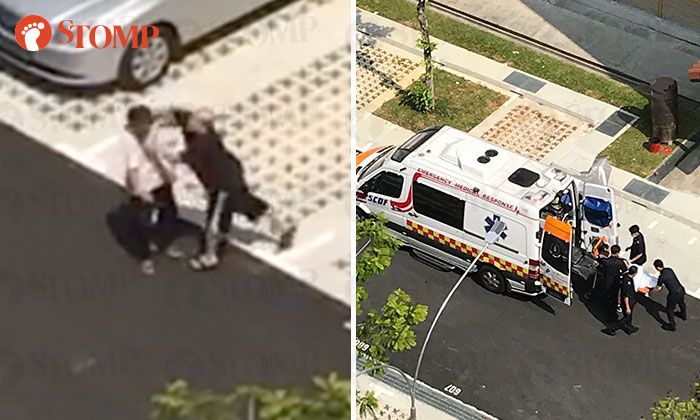 A man shoved and rained blows on an elderly taxi driver after a road dispute at the carpark behind Block 130 Bishan Street 12 at 2.37pm on Tuesday (July 24).

Stomper Kelvin, who lives at Block 130, was in his bedroom at the time of the incident when he overheard an altercation unfolding at the carpark behind his block. He looked out of his window and saw the two men in a heated dispute.

The man was shouting at the cabby, allegedly accusing him of having jammed on his brakes and almost causing an accident. The two then alighted their vehicles for a confrontation.

In a video taken by Kelvin, the man, dressed in a black T-shirt, is seen shouting at the cabby.

According to Kelvin, the man had punched the cabby many times prior to the video, causing him to fall to the ground.

The cabby then climbs to his feet. The man and cabby continue screaming and hurling vulgarities at each other.

The man also calls the cabby an “ah gua” or a sissy in dialect. The man taunts the cabby who approaches him.

Suddenly, the man swings his right fist at the cabby’s face, causing the latter to stumble a few steps. The man continues to shove the cabby.

After that the two return to their respective vehicles.

Moments later, the man is seen leaving the carpark in his vehicle, a brown car.

The cabby stays behind waiting for the authorities to arrive.

“How can he do that? The uncle (taxi driver) is so old already."

By Kelvin’s estimation, the attack happened for around two to three minutes. He also insisted that the cabby never once retaliated.

“The man punched the uncle and then went back to his car at around 2.40pm, and drove off.

“The uncle had so many bruises on his face.

“I could hear the uncle telling him “mai chao”, or “don’t run” in dialect.

“The man was just lucky that today there was no one around. Usually, there would be people nearby.

"They would have witnessed the act and capture a photo of his face.”

Kelvin said that the police and Singapore Civil Defence Force arrived about 30 minutes after the attack, although he is unsure who alerted them.

“My girlfriend told me that I should go down to talk to the police since I witnessed the whole incident.

“I went downstairs and showed a police officer the video I took.”

In response to a Stomp query, an SCDF spokesman said:

“The SCDF were alerted to the incident at 2.57pm.

“The victim was conveyed to Tan Tock Seng Hospital for treatment.”

Stomp understands that the injuries sustained by the victim were not life-threatening.

"A 46-year-old man was conscious when conveyed to Tan Tock Seng Hospital. Police investigations are ongoing.

Related Stories
Man suffers broken teeth after Grab driver punches him during argument over trip cancellation
Nurse kicked IMH patient's back at least 4 times, tied him to bed and dragged him along floor
Father and son allegedly make uncle 'punching bag' after he advises e-scooter teen to slow down
More About:
assault
attack
injury
bishan
carpark