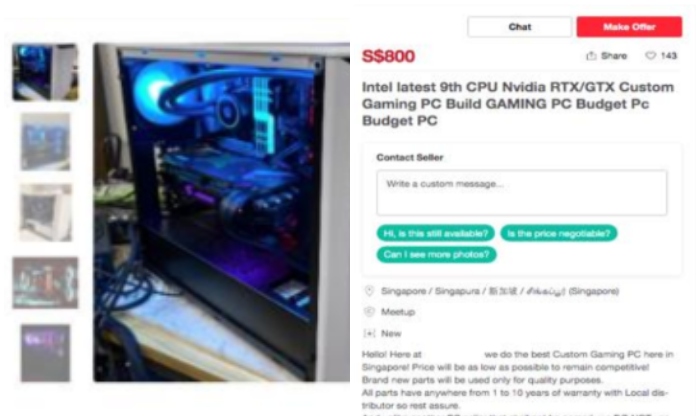 Two 16-year-old male teenagers have been arrested on Tuesday (August 4) for their suspected involvement in a series of e-commerce scams.

Between March and July 2020, the police received several reports from victims who were purportedly cheated by an online seller who was selling computer parts and high-end gaming PCs on Carousell.

"After making payments to the seller via cash on delivery or bank transfers, the victims claim that they received items which were of a lower specification," the police said.

"There were also some cases where victims received items that were not functioning."

Through investigations and close collaboration with Carousell, officers from the Commercial Affairs Department established the identity of the teenager and his acquaintance and arrested them.

Preliminary investigations revealed that the duo are believed to have cheated more than ten victims of more than $5,000.

The offence of cheating carries an imprisonment term of up to ten years, and a fine.

The police take a serious view of persons who may be involved in scams and frauds, and perpetrators will be dealt with, in accordance with the law.

Members of the public are advised to be very careful when making online purchases:

Anyone with information on such scams may call the Police hotline at 1800-255 0000 or submit information online at www.police.gov.sg/iwitness.

Related Stories
Woman allegedly cheated of over $11k by 63-year-old man she befriended on dating app
Man conned 69 people into handing over passports and more than $98k in haj tour scam
Scammers pretending to be from banks have cheated victims of $600k in 5 months
More About:
Scams
arrested
cheating