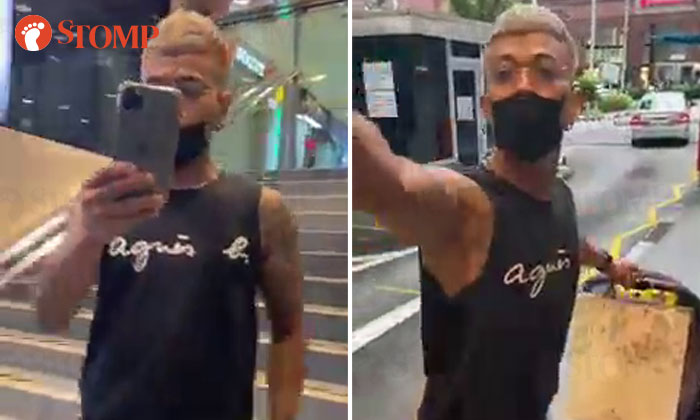 A man and a screener got into a heated argument outside Lucky Plaza on Sunday (Oct 3).

A Stomper, who is a colleague of the screener involved in the dispute, shared with Stomp a video of the incident.

She said the man started hurling vulgarities at her colleague who had allegedly shouted at him for going the wrong way.

The Stomper said: "The guy did not listen or obey our rules for SafeEntry.

"My friend asked him to call the police but he insisted on changing topic and just left the place after using vulgar language with egoism and a rude manner."

In the video recorded by the Stomper's colleague, he is heard saying "I already said sorry to you ah."

The man gestures at his sleeping child and argued that the screener never said sorry.

He says: "Don't need to shout at me, can ask me nicely what."

The screener retorts: "How nice you want me to talk to you?"

The man then demands, "Do you know who I am or not?"

This riles the other man up who starts hurling vulgarities at the screener.

The screener asks for the man's name and car licence plate number and tries to stop him from leaving but the other man walks away.

Related Stories
Man flashes middle finger, gets out of vehicle to yell at another driver for cutting him off
Man hurls vulgarities at stall vendor during dispute at Yishun coffee shop
Woman pulls down safe distance ambassador's mask at Marina Bay Sands
More About:
dispute
argument
vulgarities
Lucky Plaza