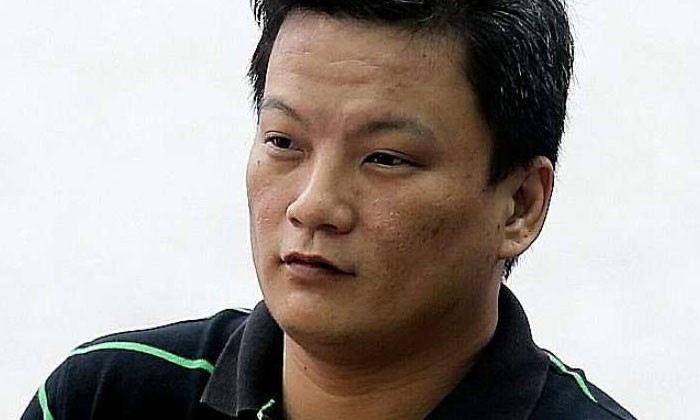 A 38-year-old man hit a pub patron in his eye with a drinking glass, causing the victim permanent eye damage, a court has heard.

Yesterday, Vincent Chong Kok Beng was jailed for 2 and a half years with three strokes of the cane, having earlier pleaded guilty to one charge of causing grievous hurt.

The victim, Mr Lim Chien Hao, 36, and his friends were drinking at a pub called Sakura in Lorong 27A Geylang at about midnight on Dec 3, 2014, to celebrate the birthdays of Mr Lim and a colleague.

Chong was also at the pub with his friends.

The court was not told what Mr Lim or Chong's occupations were.

Later, Mr Lim invited Chong's female friend to join his group and she drank with them for a while.

Mr Lim went over to Chong's group a few times later to ask her for her contact number.

At about 2am, Mr Lim went over to Chong's group but returned with his shirt and face drenched with beer, the court heard. It was not mentioned who threw the beer.

A few minutes later, Chong went over to Mr Lim and hit his left eye with a drinking glass, causing his face to bleed.

Shortly afterwards, a brawl broke out in the pub between various patrons, including some of Mr Lim and Chong's friends.

Mr Lim had thick cuts to his left upper eyelid and the outer layer of the left eye. He also had cuts to his forehead and ear.

The cuts to his eye and eyelid were stitched up the same day and he was warded for four days.

He was later advised to undergo a second eye operation, but Mr Lim, who is Malaysian, opted to see an eye specialist in Penang.

A medical report dated July 13 last year stated that Mr Lim's left eye injury is permanent. There was extensive detachment of both the retina, a light-sensitive layer of tissue, and the choroid, the vascular layer of the eye that contains connective tissue.

The report also said there is a likelihood of Mr Lim going blind in the left eye in future.

Chong has not made any compensation to Mr Lim. In mitigation, Chong said he is HIV-positive and pleaded for leniency. He also told the court that his 70-year-old father is suffering from stage 3 cancer.

District Judge Eddy Tham noted that the use of a weapon in the assault had caused permanent injury.

For causing grievous hurt, Chong, who has previous convictions, could have been jailed for 10 years, and fined or caned.

Related Stories
Violent brawl breaks out among large group of men at Clarke Quay
Teen kicked and punched man until his nose and eye socket broke -- after trying to stop him from pulling his wife's hair
Why are bouncers getting involved in a fight at Pahang Street?
More About:
court
courtroom
injured
fight
dispute