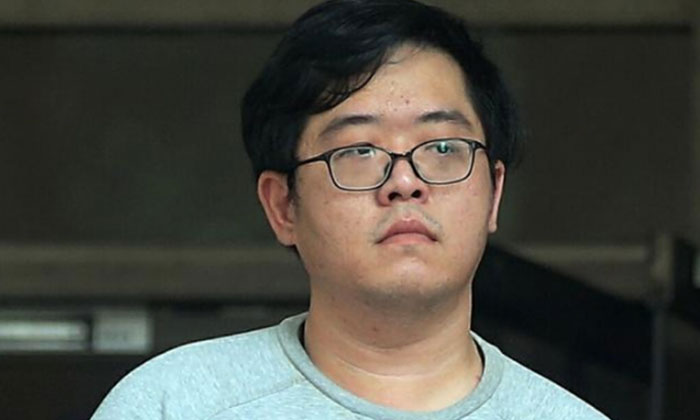 A man tasked his nephew to find someone to ‘teach a lesson’ to the lover of his mistress, which resulted in the hired muscle slashing the victim’s face, disfiguring him.

The man’s nephew who hired the assailant, Lin Demai, 26, was sentenced to 36 months’ jail and four strokes of the cane after pleading guilty to one charge of conspiring to cause grievous hurt with a knife, and another charge of voluntarily causing grievous hurt.

During the sentencing, the judge said that although the accused was a middleman, he did more than just merely passing messages.

He added that the case was premeditated, and the victim was disfigured.

Lin’s uncle, Lin Hong Liang, 54, is married and a director of a logistics company.

Lin had worked as a driver in the company at the time of the incident.

At the start of 2016, Lin Hong Liang had discovered that his mistress, Ms Cheng Yifang, 26,  was seeing the victim Mr Xu Jianyong, 33, behind his back.

In a fit of rage, he instructed his nephew to find someone to teach Mr Xu ‘a lesson’.

The accused engaged the services of Wang Fucai, 47, and asked him to find other guys who would help them in their task — to break Mr Xu’s hands and legs.

However, Wang suggested that they use a knife to slash Mr Xu’s face and leave a lasting scar instead.

From the sum, $2,000 was paid to Wang, while the rest would be given to the person who performed the deed.

The accused also gave Wang a photo of the victim so he could identify the target.

Wang looked up two other men, 29-year-old Ivan, and 47-year-old Amin to help out with the task.

Ivan and Amin then picked up another friend, Zuhairi, 34, and headed to the hotel where they would observe Mr Xu.

On the midnight of April 30, Ivan tailed Ms Cheng and Mr Xu to a carpark where they were retrieving a vehicle.

As there were closed-circuit televisions (CCTVs) in the carpark, the three men decide to follow them as they drove to a restaurant at Townshend Road.

At about 1am, Zuhairi walked towards Mr Xu and punched him in the face.

Ivan and Amin then ran up and surrounded Mr Xu, raining blows on him.

After that, Ivan took a knife and slash Mr Xu’s face.

The process was caught on a surveillance camera.

According to medical reports submitted in court, Mr Xu suffered serious cuts on his lips and forehead, leaving him permanently scarred.

In the same month on April 8, the accused also assaulted Mr Xu, hitting him on his face and body, causing a fracture on his nose.

Including the accused, a total of seven men were charged in relation to the case.

Of the seven, four had been sentenced guilty.

Ivan was sentenced to four year’s jail and six strokes of the cane for the incident.

He also faced 13 other charges, including using and trafficking of drugs, the possession of prohibited weapons, and driving while his licence was revoked.

In total, he was given 14 years jail and 16 strokes of the cane and prohibited from driving for the next eight years.

Afiqah was sent to a youth reformative center, ad Zuhairi was given 15 months’ jail.

Wang Fucai, Lin Hong Liang, and Amin have pleaded not guilty and will be heading to trial next month.