Man 'freezes on the spot' after encountering wild boar in Punggol 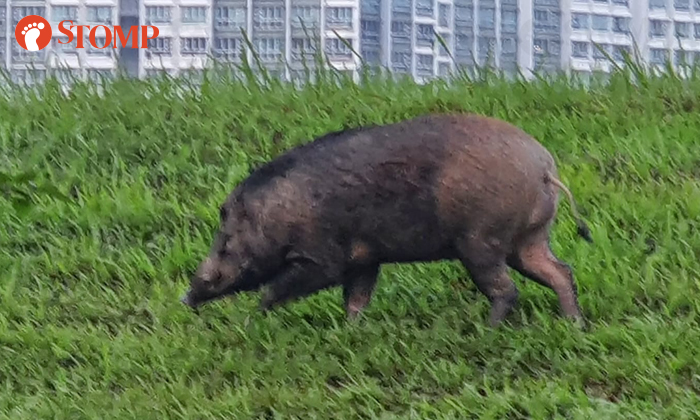 When Stomper Derek first spotted a wild boar on his regular route near Punggol Park in early September, he was so stunned that he froze on the spot.

After another two encounters, however, the animal has since become a common sight along the park connector (PCN) and no longer surprises him.

Derek told Stomp that he first saw the wild boar on Sept 8 and shared a video of it.

He recounted: "I was 10 to 15 metres away. I was paying attention to my mobile phone while brisk walking and was not expecting the wild boar along the PCN until it was less than 10m away.

"The wild boar was heading my way when I looked up. I just froze on the spot until it passed me and used my mobile phone to video it. The video is filmed at close range (less than 5 metres away) as you can see.

"There were other joggers and cyclists around at that time, but they happened to be a far distance away. I believe many of them had encountered the wild boar too.

"I reported my sighting to the authorities that same morning as my concerns were there are usually seniors doing their jog and walk in the area. I was told that they would investigate."

The Stomper said: "I had a second encounter within a month near the same spot during my regular morning brisk walk. It was a close shave this time as I encountered it at close range again.

"I believe it's the same wild boar. It was alone in the forest near the Punggol Digital District construction site. I heard its call when I passed by."

The third time that Derek spotted the wild boar was Wednesday morning (Sept 28).

He added: "It emerged from the forest to around the same spot (10 metres away from the PCN track). It usually comes out at around 7am+ and this seems to be its regular routine.

"So far, the wild boar has seemed tame and unbothered by humans cycling and jogging past. It's also no surprise to regular joggers, who just appreciate it as they go past.

"It's a good thing for wild boars and humans to cohabit side by side peacefully. However, the area will soon be redeveloped into more housing. I hope the authorities will relocate this lonely wild boar to a more conducive& environment."