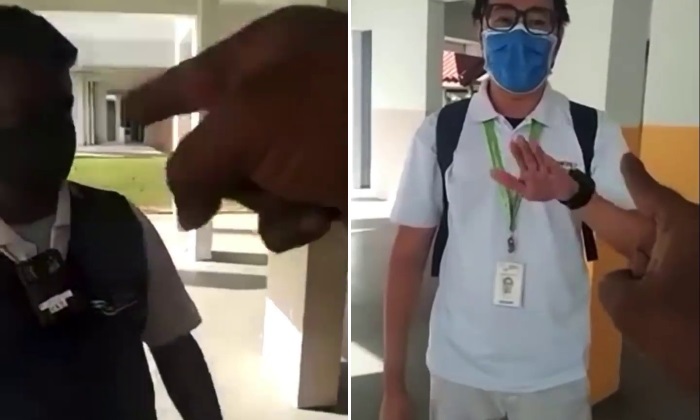 A man who was caught smoking at the void deck of an HDB block in Jurong West has been reported to the police for allegedly using vulgarities against two enforcement officers, the National Environment Agency (NEA) said.

According to Todayonline, the incident took place last Wednesday (June 22) in the vicinity of Block 908 Jurong West Street 91.

“NEA is aware that a video of two NEA enforcement officers engaging a subject who was caught smoking in a prohibited place is circulating online,” it said.

The agency noted that its enforcement officers had observed that the man was smoking in a prohibited place at the HDB void deck.

They engaged with the man by identifying themselves and informing him of the offence he had committed, the agency said.

“During the engagement, the subject used vulgarities on our officers. The incident has been reported to the police for the abusive language used on the officers and police investigations are ongoing,” said NEA.

“The subject has been charged for the smoking offence and the matter is pending hearing in the courts.”

In a video uploaded on Facebook, a man is seen berating two NEA enforcement officers who caught him allegedly smoking at the void deck.

“My question is, why we cannot smoke under the block?” the man asks one of the enforcement officers after he had been advised against posting the video he was filming.

Turning to the other enforcement officer who had identified himself as a Malaysian citizen, the man told him to “go one side”.

“Now tell me, you Malaysian right? You go one side. You Malaysian, you come (from) Malaysia, you want to catch Singaporeans smoking under the block. So what’s the reason? Why we cannot smoke under the block?” the man asks.

He then continues filming the video as the other NEA officer intervenes in the situation.

Video shows what appears to be a Singaporean man who is unhappy that foreign nationals are paid and given power over...

Related Stories
Man vapes on bus from Tampines to Woodlands
Food Junction sacks employee caught smoking and handling food without gloves in kitchen
Man lied that he had Covid-19 after Certis officers caught him smoking and spitting
More About:
smoking
NEA
caught on video