Man vapes on bus from Tampines to Woodlands 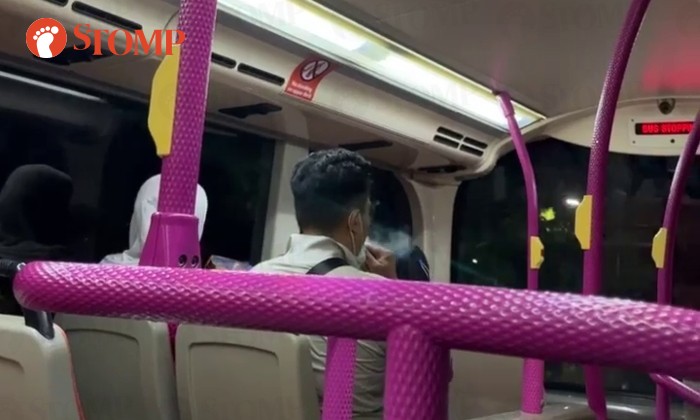 A man was caught on camera smoking an e-cigarette on the upper deck of a double-decker bus on Tuesday (June 14).

Stomper S shared a video of a passenger sitting several seats in front of her "happily vaping" with his mask pulled under his chin on bus service 168.

The man was also "on and off spewing vulgarities" to a woman sitting next to him, said S, who added: "I believe she knows him because they were quite close. I was upset about the way he treated the lady."

According to S, the man was vaping on the whole bus ride from Tampines to Woodlands Bus Interchange "for roughly 40 minutes" and that no one informed the bus captain.

She told Stomp: "He stopped vaping when he was alighting the bus but kept his mask off the whole time."

All commuters are required to wear a mask while taking public transport. Smoking is also not allowed.

The use of e-vaporisers was banned in Singapore on Feb 1, 2018. Those caught purchasing, using or having in their possession such products in Singapore are liable to a fine of up to $2,000.

The Health Sciences Authority said that last year, 4,697 people were caught for using and possessing e-vaporisers, up from 1,266 in 2020, reported The Straits Times.