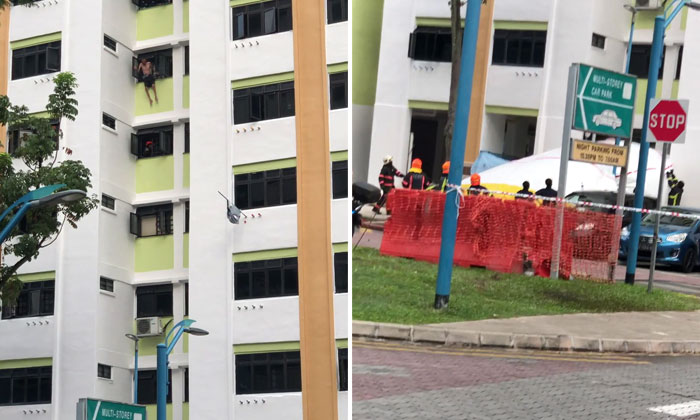 A 78-year-old man was taken to hospital and subsequently apprehended after falling from a window ledge on the sixth floor of Block 61 Geylang Bahru on June 9.

Several Stompers alerted Stomp to a video circulating online of a man sitting on the window ledge.

While Singapore Civil Defence Force (SCDF) officers are preparing to rescue the man, he falls.

He hits the ledge before falling onto a safety life air pack set up at the foot of the block.

Bystanders can be heard collectively gasping as he falls.

In response to a Stomp query, the SCDF said they received a call for assistance at about 4.25pm.

"After SCDF deployed a safety life air pack, the person fell on it," an SCDF spokesman said.

The police were alerted to a call for assistance at 3.27pm and told Stomp the 78-year-old man was conscious when taken to the hospital.

"He was subsequently apprehended under Section 7 of theMental Health (Care and Treatment) Act," a police spokesman said.