Man, 50, lies on road after being hit by car at traffic junction in Kallang 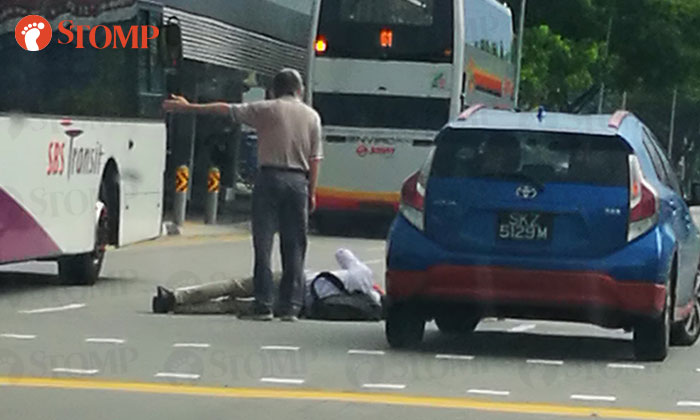 A 50-year-old man was conveyed to a hospital after getting hit by a car at the junction of Kallang Avenue and Kallang Bahru at 9.41am on Monday (July 9).

Stomper Cec was in a vehicle near the vicinity and took photos which he shared with Stomp.

In the photos, a man is seen lying on the road beside a blue Toyota SKZ5129M. Another man stands next to him, helping to direct the traffic.

It is unclear if the man helping to direct traffic was the driver of the Toyota.

“On July 9, 2018 at 9.41am, the police were alerted to an accident involving a car and a pedestrian at the junction of Kallang Avenue and Kallang Bahru.

“The pedestrian, a 50-year-old man, was conscious when conveyed to Raffles Hospital. Police investigations are ongoing.”

The Singapore Civil Defence Force (SCDF) also told Stomp that they responded to an ambulance case at the junction of Kallang Avenue and Kallang Bahru at 10am.