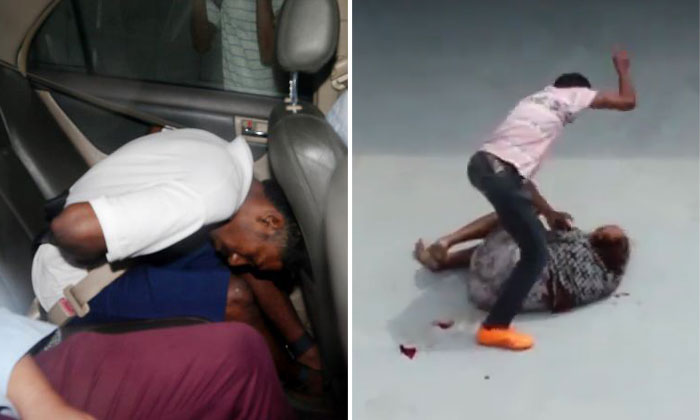 According to court documents, Jayselan N. Chandrasegar used a knife with a 10cm-long blade to stab Ms Mayuri Krishnakumar, 26, twice in her abdomen and twice on her lower back.

This caused her to suffer puncture wounds on those parts of her body.

Several Stompers alerted Stomp to a video of the incident that was posted on Facebook showing Jayselan shouting and standing over his wife who was bleeding on the ground.

He was seen running away from the scene and being chased by a few bystanders.

It happened at 11.47am on Saturday and Jayselan was subsequently arrested by police at Guillemard Road at around 12.15pm on the same day.

If found guilty and convicted under the charge of voluntarily causing grievous hurt by dangerous means, Jayselan could be sent to prison for life, or jailed up to 15 years, and may also be fined or caned.

Jayselan will be remanded for two weeks at the Institute of Mental Health (IMH) for a psychiatric evaluation.

His case will be mentioned again after.

According to The Straits Times, Jayselan is a former patient of IMH and requested to be kept in a solitary environment, claiming that he was not able to stay with any other person as this would affect his condition.

The judge said his request will be conveyed to the institute.

Jayselan also requested a phone call but this was turned down. He was heard swearing as he was taken out of the dock.

After his charge was read to him, Jayselan said: “Mayuri is my wife. For the mistake that she did, I admit that what I did to her was wrong.”

“I only stabbed her twice, not more than that. I did not think that I’ll do such a thing to my wife. I have a child at home, I couldn’t take it that she did this to me and my child,” he added, without elaborating further.

Ms Krishnakumar, who was warded at Tan Tock Seng Hospital after the attack, was said to be in a stable condition, according to earlier reports.