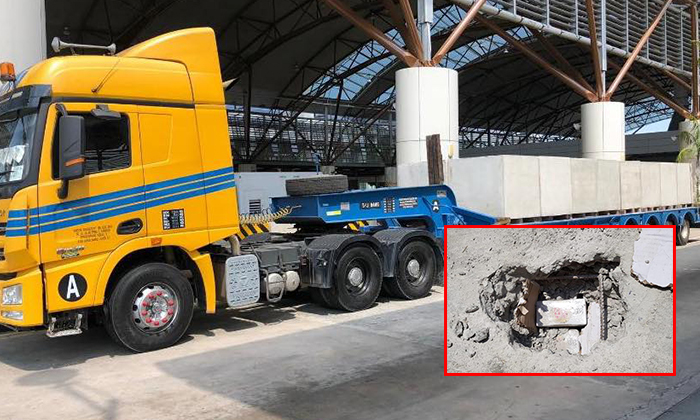 A 25-year-old Malaysian driver has been arrested after a total of 12,479 cartons of duty-unpaid cigarettes were found encased in concrete blocks.

The Immigrations and Checkpoint Authority (ICA) conducted checks on an arriving Malaysia-registered lorry at the over-sized lorry lane at Tuas Checkpoint on July 27, at about 9.05am.

The lorry was carrying a consignment 16 concrete blocks.

During the checks, the officers’ suspicions were aroused when they noticed anomalies in the concrete blocks.

The officers drilled holes into the concrete blocks and found the duty-unpaid cigarettes encased within.

The driver was immediately placed under arrest and the case was handed over to Singapore Customs for further investigations.

In a statement by the ICA on Monday (August 19), they said that this is the largest haul of duty-unpaid cigarettes uncovered by the authority in the last five years.

Related Stories
Malaysian man found with 150 boxes of 'Pop Pop' firecrackers at Tuas Checkpoint
Driver who allegedly tried to smuggle cigarettes finds out it's useless to 'con-seal' crime from ICA officers
4 Malaysians arrested for attempting to smuggle Myanmar woman out of Singapore in car boot
More About:
ICA
Tuas